Student-loan forgiveness FAQ: Everything you need to know about Biden’s $10,000 debt cancellation 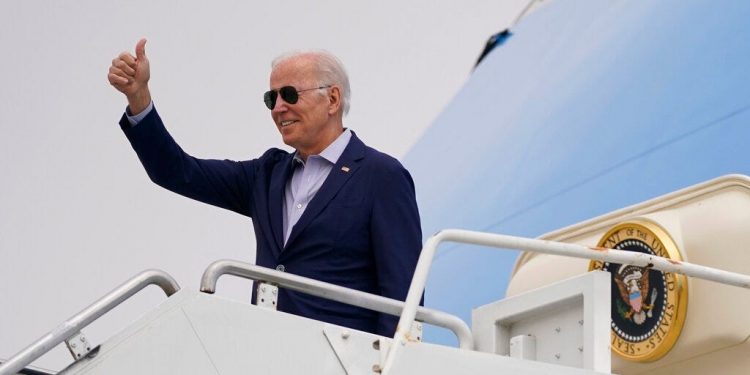 President Joe Biden motions while boarding Air Force One at Los Angeles International Airport after attending the Summit of the Americas in Los Angeles, Calif., on June 11, 2022.

President Joe Biden rolled out his plan for student loan forgiveness on Wednesday, accomplishing a key campaign promise and extending relief to millions of borrowers.

Here’s what you need to know:

How much student debt is being forgiven?

The administration will provide up to $10,000 for eligible borrowers who didn’t receive Pell Grants and up to $20,000 for Pell Grant recipients, according to the Department of Education.

The “up to” wording implies that amounts below the thresholds will be fully forgiven, but any overlap will be void. For example, a borrower who didn’t receive Pell Grants and has a debt balance of $7,000 will receive $7,000 in loan forgiveness.

Who is eligible for having their student debt canceled?

Many eligible borrowers won’t even need to send in their income data for relief. Almost 8 million borrowers could have their debt forgiven automatically, since relevant income data is already available to the Department of Education.

Who is excluded from debt relief?

A few groups won’t see any aid from Biden’s plan.

Individuals earning more than $125,000 and couples making more than $250,000 jointly are out of luck. That leaves out many students who racked up huge debt balances in lengthy programs to take on higher paying jobs in sectors like law, medicine, and finance.

Students who took out loans from private lenders are also ineligible for debt cancellation. Though these borrowers only account for roughly 8% of outstanding student debt, that’s about $131 billion in loans that aren’t affected by Biden’s program.

While Biden did not mention graduate school debt and parents who took on loans to send their kids to college will be excluded from relief, specific details for those groups have yet to be announced.

What happens if I still have debt left in my balance after some loans are canceled?

Any debt remaining after loans are forgiven will still need to be paid back, but borrowers will have some new help for getting their balances back to zero.

Borrowers on income-driven repayment plans will now only need to pay 5% of their discretionary income monthly on undergraduate loans. That’s down from the previous share of 10%. The government will also cover IDR borrowers’ unpaid monthly interest, meaning borrowers’ loan balances won’t grow as long as they make their monthly payments.

When will student-loan payments resume?

Biden also pushed back the expiration date for the student loan repayment pause on Wednesday to December 31 from August 31. That gives borrowers another four months before they need to resume paying down their student debt.

Is the forgiven debt taxable?

The state level is a bit trickier. Many states’ tax codes treat forgiven debt the same way the federal law does, meaning eligible borrowers will be off the hook for higher taxes. Yet in states where forgiven debt is treated as income, borrowers might have to pay back some of their forgiven balance in the form of state income taxes.

How do I apply for relief?

For borrowers who won’t have their debt automatically forgiven, the Department of Education will require an application to collect relevant income data and other details.

The White House hasn’t said when the application will be available, but it did note that it will come online before December 31, when the freeze on loan repayment is scheduled to end. According to the Education Department, borrowers can receive a notification when the application becomes available here.

Despite the department’s announcement, student-loan companies have cautioned that it might take longer than expected to implement any relief due to the significant changes that they will be required to make to millions of borrowers’ accounts.