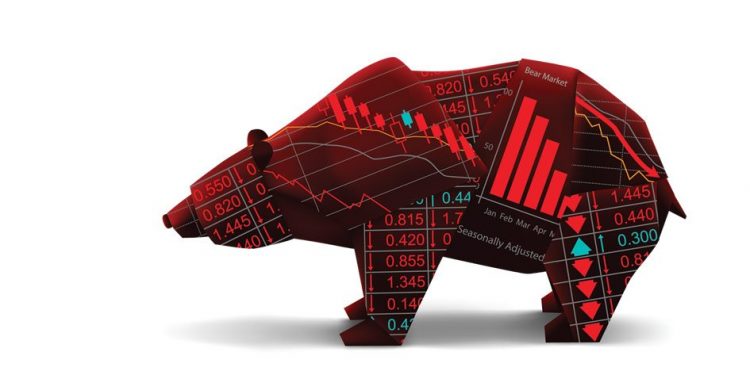 Stocks continued a sharp decline to start the week, with the S&P 500 and all other major indexes closing down for the day.

Indexes closed at the lowest point of the day.

The Dow Jones Industrial Average was down 2.8%. All industry groups closed in the red, with the worst being casinos, solar, coal, airlines, database software, mortgage REITs, consumer electronics, and jewelry companies.

Cryptocurrency-related stocks took a dive, as Bitcoin futures closed down 20% to $23,275 and at one point hit as low as $22,490. Coinbase Global (COIN), the cryptocurrency trading platform, was down 11.4%. MicroStrategy (MSTR) was off 25.5%. These companies fall in some of the worst of the 197 industry groups.

Pilgrim’s Pride (PPC), a food and meats company, erased a 17% gain from its 29.60 buy point, displaying a round-trip sell signal. The stock closed down 1.9%.

Enphase Energy (ENPH) hit the 7%-8% sell target from a 193 buy point in a double-bottom base. The stock dropped below both the 21-day exponential moving average and the 50-day moving average. Enphase was removed from IBD Leaderboard Monday.

Occidental Petroleum (OXY) closed below the 50-day moving average for the first time since its breakout in January, a bad sign. The stock closed down 6.3% today.

Oracle (ORCL) reported earnings after market close, and the stock jumped in after-hours trading on the results. Oracle closed down 4.7% today but shot up nearly 9% in extended trading.

Correction Turning Into A Bear

According to IBD founder William O’Neil’s “How to Make Money in Stocks,” normal bear markets have three legs down, but can have as many as four or five. The Nasdaq could be starting a third leg down, as discussed in IBD Live.

The Cboe Market Volatility Index, or VIX, is up almost 23% today, above the 34 level.

Tuesday starts the two-day Fed meeting. Besides the new policy statement, eyes will be on Fed Chairman Jerome Powell in Wednesday’s news conference. Investors will be watching to see if the expected pace of 50-basis point rate hikes will be enough, based on last Friday’s elevated inflation number.