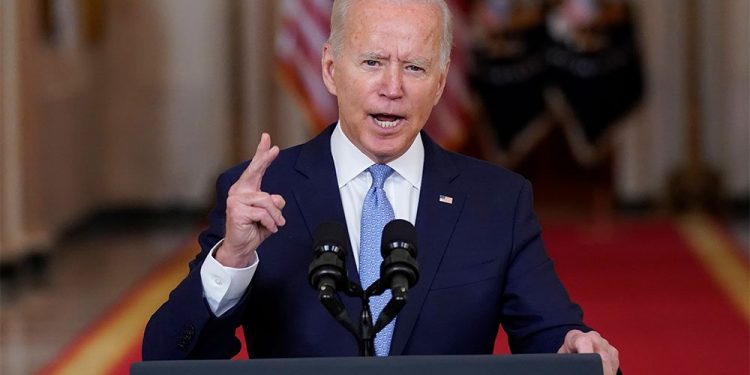 The stock market traded mostly lower Friday on signs that a diplomatic solution might be reached in the Russia-Ukraine war. Meanwhile, the U.S. announced plans to revoke Russia’s “most-favored nation'” trade status.

The Nasdaq fell 1.1%. The S&P 500 was down 0.4%, as strength in financials and industrials offset weakness in energy and metals. The small-cap Russell 2000 index was down 0.9% in early afternoon trading.

Volume rose on the Nasdaq and fell on the NYSE compared with the same time on Thursday.

On Friday, Russian President Vladimir Putin said some progress was made in talks with Ukraine, while the Kremlin said the fighting would end when the West addresses Moscow’s concerns. Putin cited “certain positive shifts” in talks, according to Reuters. Meanwhile, Russia expanded its strikes and attacked cities in western Ukraine.

President Joe Biden added to pressure on Russia and said he would ask Congress next week to sever normal trade relations with Russia. “The United States and our allies and partners continue to work in lockstep to ramp up the economic pressures on Putin and to further isolate Russia on the global stage,” Biden said.

Several U.S. companies have said they planned to pull at least some of their operations out of Russia, including McDonald’s (MCD), Goldman Sachs (GS), Exxon Mobil (XOM) and Starbucks (XOM). McDonald’s stock shot up 2.4%, Goldman Sachs gained 0.7%, Exxon up 0.1%, but Starbucks fell 2.5%.

Rivian (RIVN) deepened a four-month slump with a 7% loss. The electric pickup truck maker missed fourth-quarter estimates amid production problems. Last week, Rivian raised prices by up to 20%, citing rising component costs. The stock soared for five days after its IPO on Nov. 10, but has been declining since and hit new lows Friday.

DocuSign (DOCU) plummeted 24% to a two-year low after its fiscal-year guidance came in well below expectations. Sales of the company’s e-signature products have been declining as the pandemic eases. DocuSign’s January-quarter earnings met estimates and revenue topped views.

“The demise of the DocuSign growth story continued as the work-from-home poster child delivered good January results, which were more than offset by very weak and concerning guidance which speaks to some darker days ahead,” said Wedbush analyst Daniel Ives in a report.

Oracle (ORCL) rose 2.7% even though the database software maker late Thursday missed earnings estimates. Adjusted earnings fell 3% to $1.13 a share, vs. expectations for $1.18 a share. Revenue of $10.5 billion met views.

In its fiscal third quarter, “Oracle delivered over 7% constant currency revenue growth — our highest quarterly organic revenue growth rate since we began our transition to the cloud,” Chief Executive Safra Catz said in written remarks with the Oracle earnings release.

Auto parts maker Holley (HLLY) gained 3% Friday and remained in the buy range off a buy point of 13.74. Its relative strength line is also rising. Holley reported fourth-quarter earnings last week that beat analyst forecasts on both EPS and sales by more than 20%.