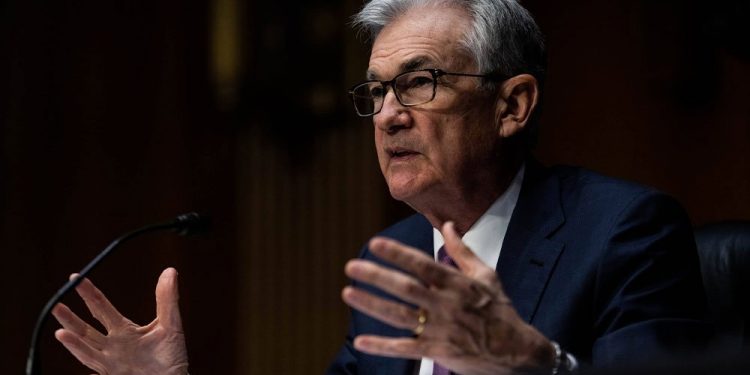 The Nasdaq composite trimmed early losses but then erased gains and was flat Wednesday afternoon. The S&P 500 also pared losses and was down 0.1%. It too erased gains in the past hour.

The Dow Jones Industrial Average was down 0.1%. Small caps also posted losses, with the Russell 2000 off 0.5%.

“It is essential that we bring inflation down,” Powell told the Senate banking, housing and urban affairs committee during his semiannual report Wednesday.

In a prepared speech, he said the Fed over the coming months “will be looking for compelling evidence that inflation is moving down,” and will make rate decisions “meeting by meeting.”

He also reaffirmed the central bank’s commitment to taming inflation, which hit a 40-year high in May, according to the consumer price index.

“At the Fed, we understand the hardship high inflation is causing,” Powell said in his remarks. “We are strongly committed to bringing inflation back down, and we are moving expeditiously to do so.”

On Wednesday, Citigroup said it sees a 50-50 chance that the U.S. will sink into a recession. The most likely recession would be a mild “garden variety” downturn, but there are “hard landing” and “stagflation” risks.

Today, the yield on the 10-year Treasury note fell 13 basis points to 3.15%, as yields continue to trend lower. That’s the lowest 10-year yield since June 10.

The price of U.S. crude oil tumbled nearly 5% to $104.50 a barrel. That’s the lowest price in nearly a month and extends a weeklong decline for oil futures.

President Biden will propose a three-month moratorium on the federal gasoline and diesel taxes, according to The Wall Street Journal. The tax is 18.4 cents a gallon for gas and 24.4 cents for diesel.

KB Home (KBH) gained 1% in advance of the homebuilder’s earnings report, which is due out today after the close. Wall Street expects KB Home to earn $2.04 per share, up 36%. Sales were expected to increase 14% to $1.648 billion.

Rival homebuilder Lennar (LEN) also gained, rising more than 3% Wednesday, a day after it reported better-than-expected earnings and revenue for the second quarter.

On Tuesday, a National Association of Realtors report said U.S. existing-home sales fell 3.4% in May to 5.41 million at a seasonally-adjusted annual rate, as homebuyers continued to struggle with inflation and rising mortgage rates.

Apple, Altria Move In Opposite Directions

Apple (AAPL) gained 0.6% Wednesday after an analyst said Apple’s services business is likely to grow faster than expected as the company monetizes its massive user base. In a note to clients late Tuesday, Evercore ISI analyst Amit Daryanani said he is more positive on the long-term outlook for Apple’s services growth after his firm’s survey of more than 3,000 smartphone users.

Altria (MO) stock slid 9% on Wednesday following a report that the FDA plans to order Juul to pull its electronic cigarettes off the market in the U.S. — posing big risks for the tobacco giant’s investment in the vaping startup. The move by the FDA could be announced as soon as Wednesday, The Wall Street Journal said.

Marathon Oil (MRO) gapped down to a loss of nearly 8%, sinking to the lowest point since April 25.

The Innovator IBD 50 ETF (FFTY) fell 2%, led down by energy and shipping stocks.

Is FedEx A Buy As it Prepares To Release Earnings on Thursday?