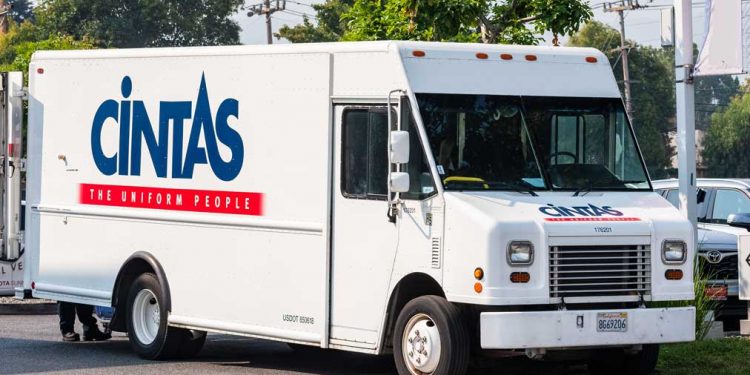 The major stock market indexes are trading higher on Monday afternoon, holding steady and near the highs of the day.

The iShares Russell 2000 small-cap ETF (IWM) is relatively unchanged, holding above the 200-day moving average for the second day in a row. Swing Trader holds a partial position in IWM.

Cintas (CTAS) rallied 0.9% on light volume and broke out of a double-bottom base, hitting the 436.74 buy point. It’s now trading within the 5% buy zone.

Cintas is a uniform and garment renting and servicing company, with a 95 Composite Rating and 92 Earnings Per Share Rating. Mutual funds added to their holdings in June, with 1,885 owning the stock, up from 1,801 in March.

Performance Food Group (PFGC) rose 2.7% and broke out of a cup-with-handle base on the weekly MarketSmith chart, hitting the 52.22 buy point.

The company is ranked No. 2 in the Wholesale Food Group, which is 21st out of the 197 Industry Groups that IBD tracks. Performance Group also has a bullish 94 Composite Rating.

Golar LNG (GLNG), a liquefied gas transporter, rose earlier in the session and broke out of a cup base, hitting the 27.62 buy point. It’s pulled back this afternoon.

Golar is ranked third the Oil & Gas Transport industry, which is 15th in IBD industry groups. The company reported interim Q2 earnings results on Aug. 11 and currently passes all nine criteria on the IBD checklist.

Moderna (MRNA) was up 2.4% after the U.K. approved its Omicron-specific Covid-19 vaccine booster.

EV Maker Up On Earnings Despite Lowered Guidance

In other stock market news, Chinese EV automaker Li Auto (LI) rose 1.4% despite reporting a miss on Q2 revenue and lowering Q3 delivery guidance. Shares are trading below both the 21-day exponential moving average and the 50-day moving average.

Green Plains (GPRE), a producer of ethanol and corn oil, was down 4.7% after a Bank of America downgrade and price target raise to 43 from 40. Shares are in a cup base with a buy point of 44.37 on the MarketSmith chart.

Siga Technologies (SIGA), a drug company that produces a smallpox vaccine, was up 4.1% on lighter volume. The company said last week the U.S. government is exercising the option to acquire $26 million of the company’s intravenous monkeypox treatment. The IBD 50 stock was featured in an article highlighting biotech stocks.

Shockwave Medical (SWAV), a medical device company, was up 2.7% on light volume. The company is ranked No. 2 in the Medical Systems/Equipment group and has earned a 97 Composite Rating.