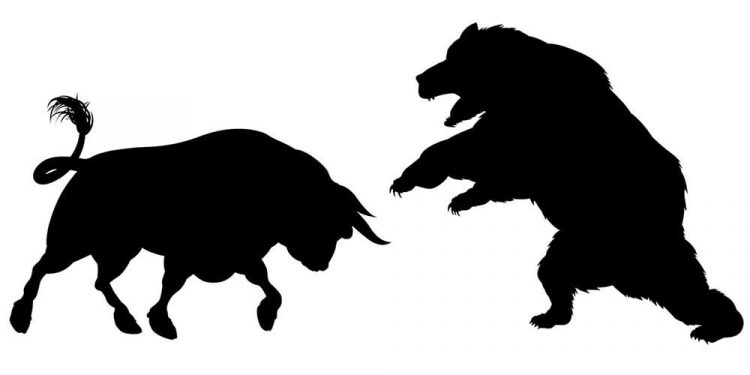 The stock market traded lower Friday as a slew of negative earnings reports drove the market lower, even as bond yields stabilized.

Although they came up from the day’s lows, major averages remained down. The S&P 500 lost 1.6% and undercut Monday’s low of 4370. For the second day in a row, the S&P traded below its 50-day moving average. The Nasdaq composite fell 1.5%. The Dow Jones Industrial Average also dropped 1.5%.

The Nasdaq fell below its 50-day and 21-day moving averages. IBD’s market outlook remains “uptrend under pressure,” which calls for cautious trading and raising some cash.

Volume fell on the Nasdaq and rose on the NYSE compared with the same time on Thursday.

All S&P sectors traded lower, with the S&P Health Care ETF (XLV) falling the most, down 2.7% by midday.

HCA Healthcare (HCA) plunged nearly 22% in heavy volume after the hospital operator lowered its full-year revenue and earnings forecasts, citing higher labor costs. The stock broke out of a flat base Wednesday but sank below the 272.36 buy point Thursday. This morning, it traded 12% below the entry, causing a sell signal. The stock is on pace for its lowest close since July 19, 2021, when it closed at 217.63, according to Dow Jones Market Data. It would also be the largest percentage decrease since March 16, 2020, when it fell 19%.

Other health care stocks were also dragged down, with UnitedHealth (UNH) and Anthem (ANTM) falling more than 2%.

PMI’s Drop A Concern For Stocks

“Although still faster than January’s omicron-induced slowdown, overall growth was dampened by a softer rise in service sector output following pressure on customer spending as prices continued to increase markedly,” IHS Markit said in a report.

Manufacturers, on the other hand, showed stronger expansion in production. The flash manufacturing index rose to a nine-month high of 57.4 from 56.1 in March. And the manufacturing PMI index hit a seven-month high at 59.7, above estimates.

Bond yields stabilized at around 2.9% after yesterday’s surge on remarks by Fed Chairman Jerome Powell that the Fed intends to take a more aggressive monetary stance, likely raising rates by a half point next month.

Retailer Gap (GPS) fell 20% after the company cut its fiscal first-quarter guidance and announced the departure of Nancy Green, CEO and president of its Old Navy business. The drop in shares would be to the lowest close since July 14, 2020, when it closed at 11.15, according to Dow Jones Market Data.

Verizon (VZ) fell more than 5% after the company’s updated 2022 profit outlook came in at the lower end of previous guidance. Verizon’s first-quarter adjusted earnings edged above estimates while revenue met views. The stock broke out of a cup-with-handle base Thursday, but slid below the 54.80 buy point Friday morning.

American Express (AXP) fell 1.2% and continues to form a cup-with-handle base despite slipping below the 50-day moving average. The credit card company beat first-quarter earnings expectations and reaffirmed its 2022 guidance early today.

The energy sector began the day with gains but by midday it had reversed. Oilfield services giant Schlumberger (SLB) gained 2% as it beat Q1 earnings and revenue estimates. The company also announced a 40% increase in its dividend.

Oil stocks have been on the upswing since the Biden administration has resumed selling leases to drill for oil and gas on federal lands.