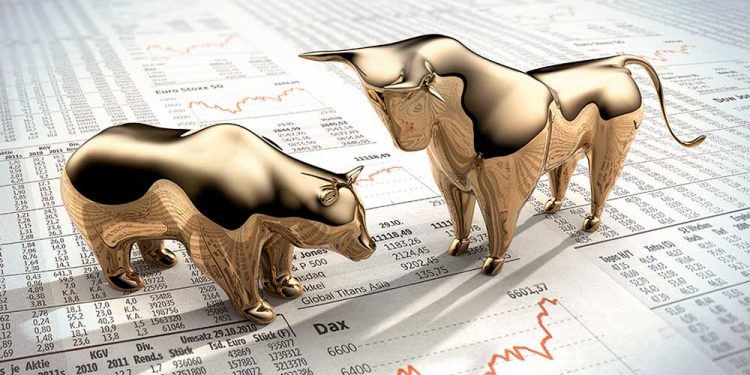 Volume fell on the NYSE and Nasdaq compared with the same time on Thursday. (The stock market was closed for Good Friday.)

Murphy Oil (MUR) rose above the 43.30 buy point of an ascending base. Volume was heavy and the relative strength line is also at new highs — two bullish signs for the breakout. The company is in the top-ranked international oil and gas exploration and production industry.

Gold mining stocks also jumped Monday as the price of gold shot up. The S&P Gold Shares ETF (GLD) gained 0.8%. Barrick Gold (GOLD) gained 1.5% and was approaching its 26.17 buy point of a flat base.

President Biden announced on Friday that he would resume selling leases to drill for oil and gas on federal lands starting today, reversing an earlier campaign pledge.

Marriott International (MAR) jumped 1.5% after the stock joined the IBD 50. The stock is in a buy range after breaking through its 179.40 buy point of a cup-with-handle pattern.

The Innovator IBD 50 ETF (FFTY) fell 0.6% at midday. Health care stocks were the biggest drag on the IBD 50.

Bank of America (BAC) rose 3% after the company’s first-quarter earnings and revenue topped analysts’ consensus estimates. The bank reported EPS of 80 cents and revenue of $23.2 billion. Ahead of the report, BofA stock had sunk to the lowest level since last July.

Tesla gained 1.3% as it forms a cup-with-handle base with a 1,152.97 buy point. Tesla — which reports earnings Wednesday after the close — plans to reopen its Shanghai plant today, reports said. The plant had been idled since March 28 due to a Covid lockdown. It’s not clear when production will resume.