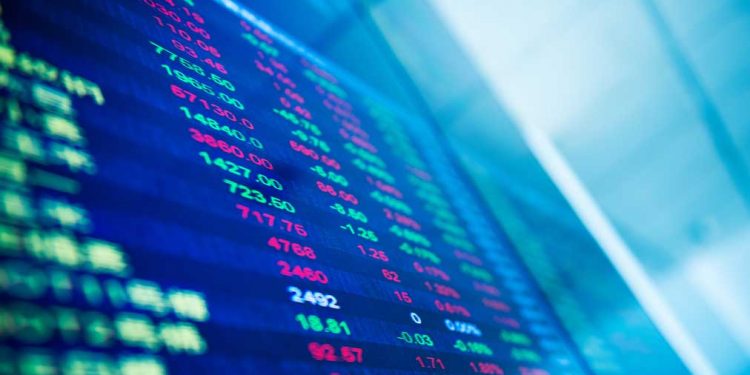 The stock market edged lower Monday in another volatile session as bond yields and oil prices rose again. The Nasdaq composite undercut last week’s lows and looks poised for another test of the 13,000 level.

Beaten-down semiconductor stocks outperformed in the Nasdaq 100, helping lift the VanEck Semiconductor ETF (SMH) to a gain of 1.5%. Top-performing chip stocks in the Nasdaq 100 with gains of at least 2% included Microchip Technology (MCHP), Analog Devices (ADI) and Lam Research (LRCX).

The Dow Jones is sandwiched between its 50- and 200-day moving averages. The 50-day line has proved to be a support level so far, with the 200-day line a resistance level for now. The blue-chip index tried to move above the 200-day line in late March but quickly got turned away.

The Dow Jones Industrial Average ended with a loss of 0.1% in the stock market today. The Nasdaq composite also dipped 0.1% and the S&P 500 fell less than 0.1%. Preliminary data showed volume on the NYSE and Nasdaq coming in lower than Thursday.

Leaderboard stock Tesla (TSLA) outperformed ahead of this week’s earnings report. TSLA stock added 2% as it wages a battle near the 1,000 level. Results are due Wednesday after the close.

Money flowed out of bonds, sending the 10-year Treasury yield higher by 3 basis points to 2.86%. The bond market certainly looks oversold at this point, with the iShares 20+ Treasury Bond ETF (TLT) down more than 9% since April 1. The bond market has been pricing in aggressive interest rate hikes by the Federal Reserve this year.

The outperformance of financial stocks came amid a sell-off for Charles Schwab (SCHW), which missed on quarterly earnings and sales and gapped below its 200-day moving average. Bank of America (BAC) also reported Q1 results and reversed nicely higher after a soft start.

The stock market uptrend, first confirmed by the S&P 500 on March 16 with a follow-through day, has come under pressure as distribution days start to increase on the S&P 500 and Nasdaq.

Through Thursday, the S&P 500 showed five higher-volume declines since March 31. The Nasdaq composite shows four since April 5. When distribution days start to cluster like this, it could be a sign of more softness ahead.

The Innovator IBD 50 ETF (FFTY) gave back less than 1%, but IBD 50 firms like Comstock Resources (CRK), LSB Industries (LXU) and Eagle Bulk Shipping (EGLE) ended with gains of at least 3%.

Oil and gas stocks dominated the upside in the MarketSmith Growth 250. Small cap Earthstone Energy (ESTE) broke out over a trendline entry near 14.45, rising more than 6% in above-average turnover. It’s near the top of a 12-week consolidation.

In the refiner group, HF Sinclair (DINO) jumped 5%. It’s near the top of a yearlong consolidation.