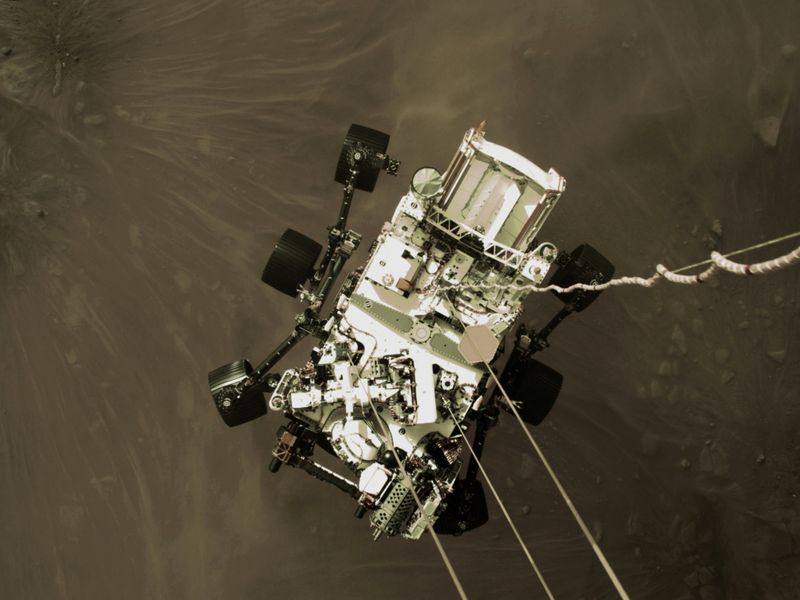 The first high-resolution, color image to be sent back by the Hazard Cameras (Hazcams) on the underside of NASA’s Perseverance Mars rover is seen after its landing on Mars February 18, 2021. NASA/JPL-Caltech/Handout via REUTERS

LOS ANGELES  – NASA scientists on Friday presented striking early images from the picture-perfect landing of the Mars rover Perseverance, including a selfie of the six-wheeled vehicle dangling just above the surface of the Red Planet moments before touchdown.

The color photograph, likely to become an instant classic among memorable images from the history of spaceflight, was snapped by a camera mounted on the rocket-powered “sky crane” descent-stage just above the rover as the car-sized space vehicle was being lowered on Thursday to Martian soil.

The image was unveiled by mission managers during an online news briefing webcast from NASA’s Jet Propulsion Laboratory (JPL) near Los Angeles less than 24 hours after the landing.

The picture, looking down on the rover, shows the entire vehicle suspended from three cables unspooled from the sky crane, along with an “umbilical” communications cord. Swirls of dust kicked up by the crane’s rocket thrusters are also visible.
TECHNOLOGY

Seconds later, the rover was gently planted on its wheels, its tethers were severed, and the sky crane – its job completed – flew off to crash a safe distance away, though not before photos and other data collected during the descent were transmitted to the rover for safekeeping.

The image of the dangling science lab, striking for its clarity and sense of motion, marks the first such close-up photo of a spacecraft landing on Mars, or any planet beyond Earth.