Shinzo Abe’s assassination sends shockwaves throughout Japan because firearms are so rare that some people never ‘see a gun in the open,’ expert says 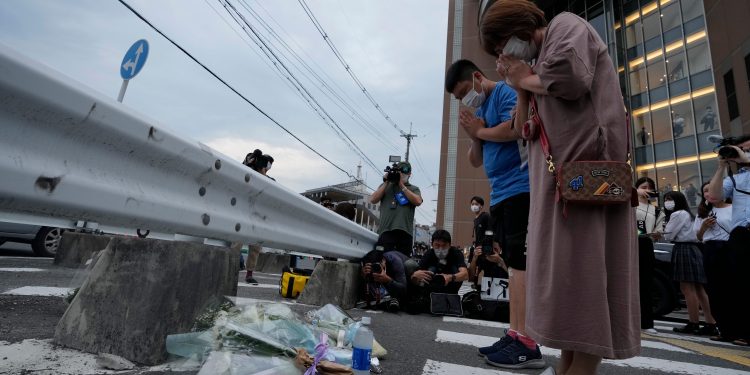 People visit a makeshift memorial at the scene where the former Prime Minister Shinzo Abe was shot while delivering his speech to support the Liberal Democratic Party’s candidate during an election campaign in Nara, Friday, July 8, 2022.

The assassination of former Japanese Prime Minister Shinzo Abe on Friday with what appeared to be a homemade gun was surprising enough given the country’s low homicide rates, but one expert told Insider that it being a gunshot that ended Abe’s life made the event even more astonishing.

“There could be some Japanese people who go their entire lives and never really handle a gun or see a gun in the open,” Iain Overton, who runs Action on Armed Violence, a London-based research group that aims to reduce gun violence, told Insider.

That’s because of Japan’s culture around guns and the country’s strict gun laws. Overton said Japanese people have to submit 13 different forms to apply for a gun certification in Japan. Owners have to attend an all-day class, pass written and technical tests, recieved a mental health evaluation, get a background check, and apply for recertification every three years. They’re also only allowed to own shotguns and rifles — no handguns.

In 2021, Japan recorded a total of 10 shootings with one shooting death, The Washington Post reported.

“There is no fear of gun violence anywhere,” Overton said. “There’s no drive-by shootings, there’s no road rage. There’s no mass shootings in schools.”

Overton said he wasn’t surprised to find out the gun used was homemade, considering how difficult it is to get a gun in Japan. With strict gun laws, the public might look at security and ammunition as areas in need of more stringent regulation, Overton said.

“You don’t see the sorts of levels of security that you see with US presidents or with American politicians because the lethal threat of a sniper rifle or somebody taking potshots at an American president is far greater because of the ubiquity of guns,” Overton said.

Video taken before the shooting shows the suspected gunman standing just feet away from the former prime minister, who has little visible security.

The type of ammunition used in the homemade gun will also likely be a central topic of conversation amongst Japanese lawmakers, Overton said. If the ammunition wasn’t homemade, there could be questions about how the gunman obtained it.