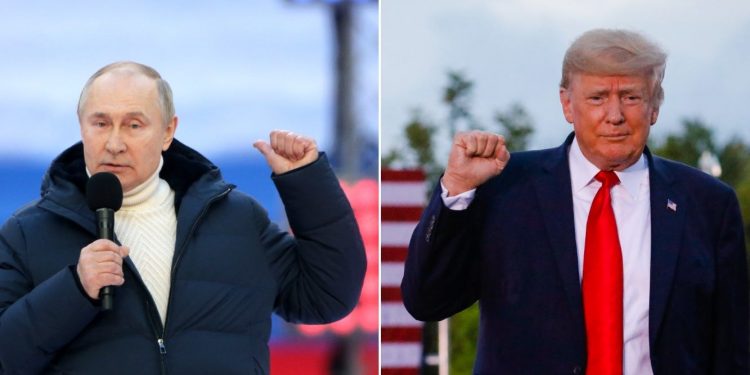 “It looks like Vladimir Putin is channeling his inner Donald Trump,” Hannity said on his Friday radio show, according to HuffPost.

Putin took to the stage at Moscow’s Luzhniki Stadium on Friday to drum up support for the war in Ukraine.

In the crowd, thousands of supporters waved Russian flags and banners marked with the letter ‘Z,’ a symbol of the Russian invasion, MailOnline reported.

“He had a what looked like, it almost looked like the big house in Michigan, their football stadium I think holds 110,000 people,” Hannity said, per HuffPost.

Trump is known for holding mass rallies, often with thousands of supporters in attendance, at arenas, stadiums, and airports.

Later in the day, during his Fox News show, Hannity once again accused Putin of trying to imitate Trump.

“Today, during a big, manufactured pro-Putin rally in Moscow, his best attempt to look like Donald Trump, there were some embarrassing technical difficulties during Vladimir’s big speech,” Hannity said.

Putin gave a speech claiming that Russia was experiencing an unprecedented “unity,” but the broadcast was interrupted while he was still speaking.

According to The Guardian, state TV cut him off to show songs performed earlier in the day. Putin’s speech was then re-aired from the start. The Kremlin’s spokesperson Dmitry Peskov blamed a technical failure, The Guardian said.

Hannity has previously called for Putin to be removed by “whatever means necessary.”