Scientists have found two strange stars with their own “pairs”. They were helped by forced photometry 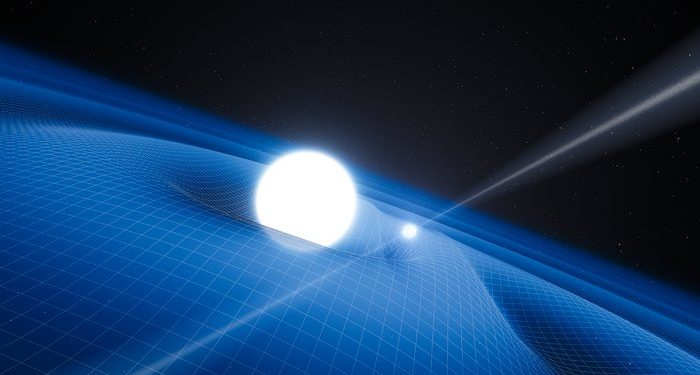 This artist’s impression shows the exotic double object that consists of a tiny, but very heavy neutron star that spins 25 times each second, orbited every two and a half hours by a white dwarf star. The neutron star is a pulsar named PSR J0348+0432 that is giving off radio waves that can be picked up on Earth by radio telescopes. Although this unusual pair is very interesting in its own right, it is also a unique laboratory for testing the limits of physical theories. This system is radiating gravitational radiation, ripples in spacetime. Although these waves (shown as the grid in this picture) cannot yet be detected directly by astronomers on Earth they can be sensed indirectly by measuring the change in the orbit of the system as it loses energy. As the pulsar is so small the relative sizes of the two objects are not drawn to scale. Anastasiya Nikiforova

Analyzing data from the space observatory Spektr-RG and Zwicky Transient Facility, astronomers from the California Institute of Technology and other countries have discovered two new pulsars. The scientists report the discovery in a paper published in the arXiv preprint repository.

Now a group of astronomers led by Antonio Rodriguez of the California Institute of Technology has discovered two new strange polars, which are named ZTFJ0850+0443 and ZTFJ0926+0105. They were found by comparing the eROSITA Final Equatorial Depth Survey (eFEDS) catalog with the ZTF Data Release 5 (DR5) forced photometry.

According to the study, ZTFJ0850+0443 is an eclipsing polar with an orbital period of 1.72 hours at a distance of about 3,260 light years from Earth. Its white dwarf mass is about 0.81 solar mass, while the mass of its companion star is estimated to be about 0.12 solar mass. The results show that ZTFJ0850+0443 has an unusually weak magnetic field strength, below 10 MGs.

At a distance of about 1,200 light years, ZTFJ0926+0105 is an eclipsed polar with an orbital period of about 1.48 hours. It has a more typical for polars magnetic field strength – not less than 26 MHs. But ZTFJ0926+0105 is an unperturbed star, so the team has not been able to measure the mass of the mysterious white dwarf.

Physicists created an atomic laser that can work forever

Near Earth found two planets that are very similar to ours