Russian officials warned companies like McDonald’s and IBM that corporate leaders who criticize the government could be arrested, report says 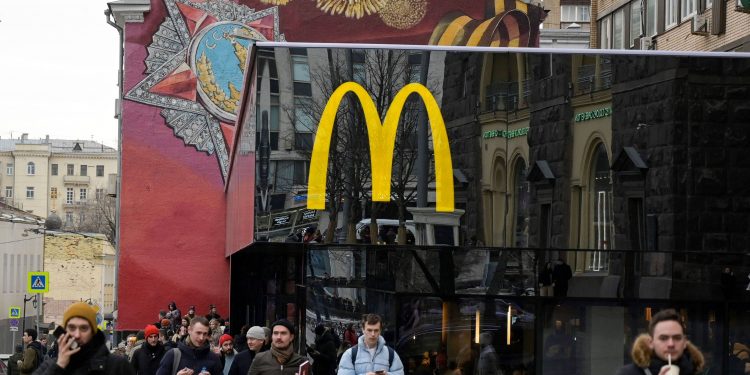 Men walk in front of McDonald’s flagship restaurant in Moscow’s Pushkin Square on March 13, 2022 — the company’s last day in Russia.

Prosecutors in Russia have issued stark warnings to Western companies that pull out of the country or criticize its government, The Wall Street Journal reported Sunday.

Companies from various business sectors have been told that their corporate leaders could be arrested if they criticize Russia, and that companies shutting down operations in the country could have their assets seized, sources told The Journal.

Russia said last week that it could seize the assets of companies that suspended operations in Russia. Droves of major US and European companies have pulled out of the country after it launched a full-scale invasion of Ukraine on February 24. Russia has also been hit with crippling economic sanctions by the West.

McDonald’s, IBM, and Yum Corp did not immediately respond to Insider’s requests for comment.

One source told The Journal that some companies are already working on transferring executives out of Russia in response to the threats.

McDonald’s announced on Tuesday that it was temporarily closing its restaurants and pausing operations in Russia. In a statement, the company said it would continue to pay the salaries of its 62,000 employees in the country during the pause.

“Our values mean we cannot ignore the needless human suffering unfolding in Ukraine,” CEO Chris Kempczinski  said, adding: “As we move forward, McDonald’s will continue to assess the situation and determine if any additional measures are required.”

IBM and Yum Corp also announced last week they would be suspending operations in Russia.

The Russian Embassy in Washington, DC, did not immediately respond to Insider’s request for comment.