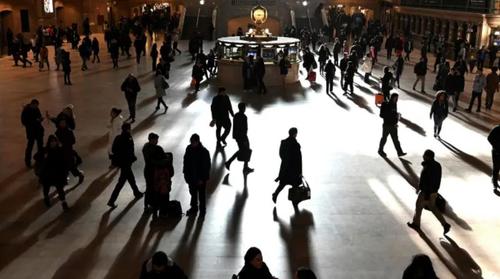 The unprecedented economic ructions caused by the pandemic (and, more importantly, the lockdowns and job-destroying restrictions on business that governments ordered in response to the pandemic) have forced many of Americans to dramatically rethink their relationship with work.

Clearly, there’s something going on with the labor market. While JOLTS data show that millions of workers in the US continue to quit their jobs (and it’s not just low-paying jobs in retail and hospitality; increasingly white collar jobs are being left open), the last three months have yielded jobs creation numbers that have disappointed expectations (but are apparently still strong enough to justify a March rate hike by the Fed).

Massive gains in crypto and equity markets since the start of the pandemic have given many Americans breathing room allowing them to pursue “alternative” lifestyles (be it “vanlife” or taking a stab at starting a small business of their own, even if that business is a simple dog-walking business). But not everyone who has left “traditional” work over the past two years is a crypto millionaire. Some have simply been so attracted to the DIY ethos that they’ve decided to take the leap, aided by generous federal stimulus benefits).

With so many people branching out into the unknown, social media and communities like Reddit have become important digital gathering spaces for people to compare  notes and share stories (both encouraging, and discouraging) about their forays into what some are calling the “antiwork” movement.

Now, there’s a whole subreddit dedicated to it.

As the FT reports, as the labor force participation rate in the US flatlines below pre-pandemic levels, some of the millions of Americans who quit their jobs last year are finding their way to the “antiwork” subreddit.

One prominent member of this community is Doreen Ford, who quit her job long before the pandemic to start her own part-time dog-walking business.

Doreen Ford spent 10 years working in retail stores in the Boston area and hated it. So in 2017, when Ford’s grandmother suggested that she give up her traditional job altogether and leverage her love of dogs to make ends meet, she went for it. Ford walks dogs part-time, but otherwise has not held a traditional job since and says she has never been happier. “Usually, at best, [working was] pointless,” said Ford, 30, “and at worst it was degrading, humiliating and exploitative.”

As a moderator of r/antiwork, Ford has overseen the community during a massive explosion of membership, which has ballooned from 160K in October 2020 to 1.6M at the end of 2021.

These numbers have become large enough to force Goldman Sachs’ analysts to take notice: In a November note, Goldman warned that the “antiwork” movement might present a “long-run risk” to labor force participation.

Their numbers are sufficient to prompt Goldman Sachs to warn in a November research note that the antiwork movement posed a “long-run risk” to labour force participation. “I think there’s a lot of positions that just don’t make any sense, that do not have to exist,” Ford said. “You’re just pushing around papers for no good reason. It doesn’t really help anybody.” “Idlers”, as members of the antiwork movement call themselves, largely believe that people should strive to work as little as possible and preferably for themselves. Many who have stopped working say they operate their own microbusinesses, like Ford, or work as few hours as possible in part-time jobs in order to survive. Some take on roommates or raid dumpsters for food to reduce their cost of living, according to Ford.

The subreddit was launched in 2013 and initially had 1,600 members. A typical threat focuses on the benefits of leaving traditional employment, along with stories about horrible bosses and the depredations of the modern work environment.

Antiwork first appeared on Reddit in 2013. A survey of almost 1,600 members of the “subreddit” administered by its moderators found that they were heavily male and based in North America. Half of the respondents say they still have full-time jobs. The subreddit is filled with stories that workers say prove that their bosses do not care about them.

One poster, who goes by amethysttt07, cited the case of a promised pay increase that went instead to a co-worker without explanation: “Just a friendly reminder unfortunately we are all disposable and can get replaced in an instant. Even if you try your best and slave away hours it won’t pay off.” Another bragged about working from home while infected with Covid-19, but “[playing] video games 85 per cent of the time”. “Boss makes a dollar, I make a dime. That’s why I f**k around on company time baby,” wrote Brotendo88.

It all sounds great. But one can’t help but wonder: what will all these people do when retirement age arrives, and none of them have contributed to social security? Starting a business is one thing, but getting by on small-time hustles and the kindness of strangers probably isn’t a responsible long-term strategy for financial stability.

And let’s not forget the other side of the coin: the pandemic has been a boon for the retire early movement, which also could create serious problems for the workforce participation rate, as we explained just the other day.