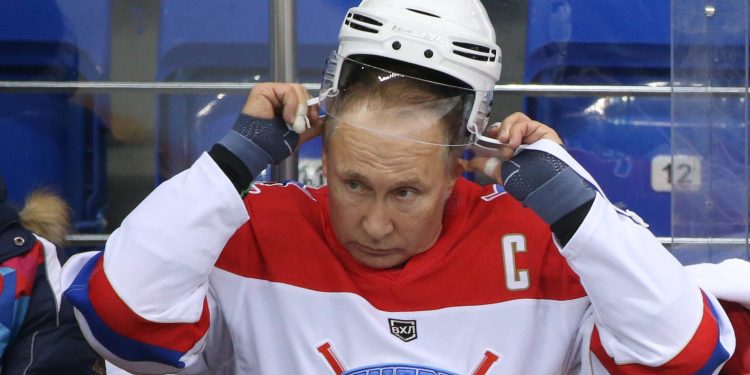 Four months after Russian forces invaded Ukraine, the nation’s standing in the hockey community is heading into uncharted territory.

Russia has not only shown a willingness to detain international stars, such as WNBA star center Brittney Griner, but also an iron fist leveled toward its own hockey players.

Ivan Fedotov, a Philadelphia Flyers goalie prospect selected 188th overall in the 2015 NHL draft and considered a contender for the team’s backup netminder spot, was sent to the arctic on military duty last week.

“He was sent to a military facility in the far north and has no ability to communicate. That’s all the information we have,” JP Barry, Fedotov’s agent, told Insider.

Kirill Kaprizov, a star winger for the NHL’s Minnesota Wild, became the subject of confusion on Wednesday after reports emerged from Russia saying he is wanted for allegedly purchasing a military ID before returning to the US. Kaprizov’s agent told The Athletic that the player has yet to return.

NHL general managers have even wanted stars as big as Washington Capitals captain Alexander Ovechkin — who has enjoyed a relatively close relationship with Putin — to consider not returning to Russia over the off-season, according to The Athletic. (Ovechkin went back anyway.)

Going back to the Soviet Union, hockey has been the premier Russian sport and a source of soft power, but uncertainty over the status of its players has reached a level not seen since the Cold War, when players from the Soviet Red Army team had to defect to the United States to play in North America.

Thursday night’s 2022 NHL Entry Draft will be an early test of how comfortable front offices around the NHL feel about putting their confidence in Russian players.

“The hesitation was evident as soon as the invasion of Ukraine began because there was a fear that Russia would tighten up their borders for defectors as they have,” Tony Ferrari, a draft analyst for The Hockey News, told Insider.

“Recently, the Ivan Fedotov detainment has been seen as Russia setting an example for young Russian players who plan on leaving the country for the NHL and North American in general,” Ferrari continued. “This level of uncertainty and the lack of Canada and the US granting work visas — or visas of any kind — to Russian nationals has made drafting a Russian-born player a major risk.”

Ferrari explained that, previously, Russian players faced a “mostly outdated” hesitancy from some teams in the post-Soviet era, largely because of the lengthy contracts teenage players would sign in Russia’s KHL, widely considered the second best professional league in the world.

However, with the invasion of Ukraine, some teams won’t even make a bargain pick for a top Russian player later in the draft — such as Pavel Mintyukov and Danila Yurov, both ranked in the top 10 by the NHL Central Scouting Report for their North American and European skaters — according to Ferrari.

“There are multiple teams I’ve spoken to that have taken Russians off their board in the first three rounds, and there have been rumors of others taking the Russian players off their boards completely this year,” Ferrari said.

“Hockey, and sports in general, are ultimately a business,” he added. “Putting your money in a sinking asset isn’t going to work in business of any sort and currently, NHL teams often view the Russian market as a sinking asset.”