Putin shrugs off Western sanctions over the Ukraine war, saying ‘it’s impossible to fence off a country like Russia’ 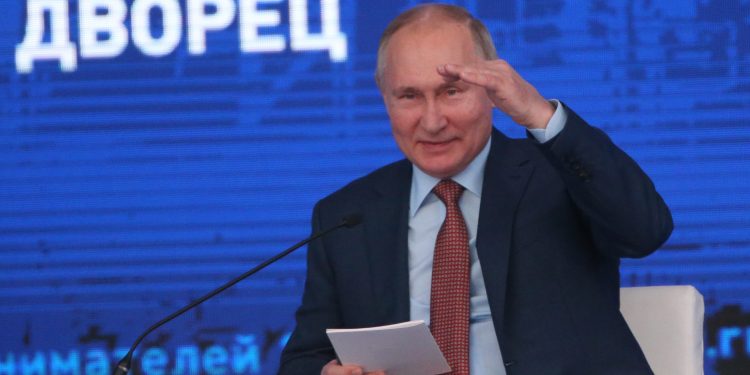 Russian President Vladimir Putin took a bullish tone on Thursday as he discussed the West’s efforts to isolate Russia’s economy amid the Ukraine war, suggesting that the countries refusing to do business with Moscow are only hurting themselves.

“Our economy will be open — whoever isn’t interested will be robbing themselves,” Putin said during a meeting with young Russian entrepreneurs, per the New York Times. “It’s impossible to fence off a country like Russia, and we are not planning to put up a fence like that around us ourselves.”

The US and its European allies, among others, have slapped a slew of unprecedented economic sanctions on Russia over its unprovoked war in Ukraine.

The measures have had a colossal impact on the Russian economy. Economists largely expect the country to plunge into a deep recession in the second quarter as the exodus of major companies and slowdown in trade slams activity. The country’s central bank estimated the economy could shrink as much as 10% in 2022 alone, and the sanctions are practically guaranteed to crimp Russian growth well into the future.

The Kremlin, however, is acting like it’s not feeling the heat. Despite shouldering more sanctions than any other country, the Russian government is still raking in billions of dollars in energy exports every month. The West’s efforts to kneecap the Russian energy sector were somewhat half-baked, as the UK and Europe still rely heavily on the country’s natural gas. The Kremlin continues to sell discounted oil and gas to India and China as well, further bolstering the government’s energy revenue and maintaining a key source of funding for its invasion of Ukraine.

As Putin spoke with the entrepreneurs on Thursday, he compared himself to Peter the Great — the emperor who greatly expanded Russia’s territory and helped morph it into a major power in Europe. In the process, Putin effectively justified the invasion of Ukraine as part of a historic effort to claim lands that he characterized as belonging to Russia.

Putin said Peter the Great was “not taking away anything” via his conquests, but “returning and reinforcing, that is what he was doing.”

In an apparent reference to Ukraine, he added, “Clearly, it fell to our lot to return and reinforce as well. And if we operate on the premise that these basic values constitute the basis of our existence, we will certainly succeed in achieving our goals.”

By characterizing the war as part of an effort to expand Russian territory, Putin contradicted other justifications he’s offered for ordering the invasion — including falsely claiming Ukraine is led by Nazis.