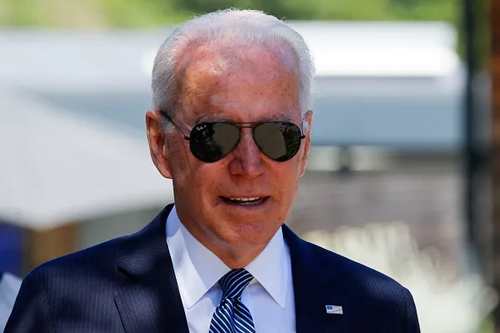 White House press secretary Jen Psaki in a Thursday interview quashed speculation that President Biden is preparing a trip to Ukraine after Politico and other reported Wednesday that it’s a possibility. “No decision on the potential visit has yet been made as deliberations continue inside the White House. President Joe Biden and Vice President Kamala Harris remain candidates to represent the U.S. in the Ukrainian capital, though it’s far more likely that a Cabinet member like Secretary of State Antony Blinken or Defense Secretary Lloyd Austin will go, the officials said,” Politico wrote.

Since the report, the administration has been questioned over whether such plans are in the works, also following the UK’s Boris Johnson’s surprise visit to meet with Zelensky in Kiev last week. Psaki on Thursday was asked about it during a “Pod Save America” podcast interview. “He is ready for anything. The man likes a fast car, some aviators — he’s ready to go to Ukraine,” Psaki described, but then stressed, “we are not sending the president to Ukraine.”

But fast cars and aviators aside, it was the comparison to Boris Johnson that was the most interesting and revealing.

She described that for the British Prime Minister to make it to Kiev last week, which was kept secret until moments after he met face to face with Zelensky, he had to take a train in the middle of a war zone – suggesting that this would be near impossible to facilitate for the US president.

Psaki explained that Johnson “took an eight-hour train through a war zone to get to the middle of Ukraine” – and continued:

“So no, that is not in the plans for the president of the United States,” Psaki said. “We should all be maybe relieved about that.”

“You’re welcome, America. We need him to do a lot of things,” she added.

But we should also point out that, no Jen Psaki… Biden is not at all “ready” to go to Ukraine even if he wanted to go…

Biden on Thursday had told reporters, “We’re making that decision now” – regarding sending a top level US official to Ukraine. Sen. Steve Daines (R-MT) and Rep. Victoria Spartz (R-IN) became the first known US officials to visit the country since Russia’s Feb.24 invasion.

Likely this is also being viewed as a precursor to a possible trip by Secretary of State Antony Blinken, which would require significant security measures and logistics.

The pair of Congress members toured some of the devastated suburbs of Kiev, including Bucha, after which the urged more weapons from the West. “The sooner we can provide Ukraine with the lethal aid they need to win this war, the sooner we will end the war crimes,” Sen. Daines said in a statement.