Prosecutors open Steve Bannon trial with simple argument: The Trump ally decided he was ‘above the law’ 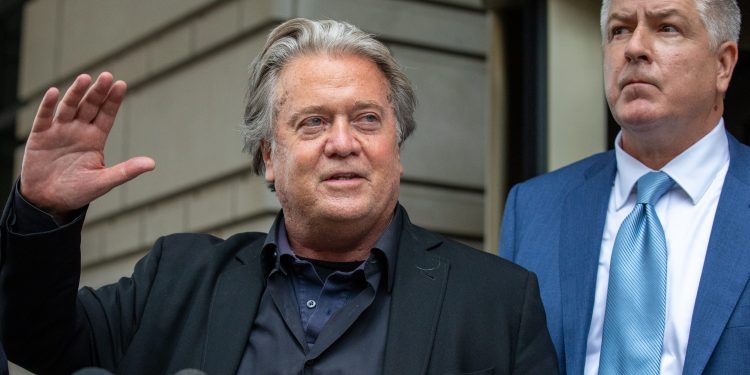 Kicking off the trial of Steve Bannon, federal prosecutors on Tuesday stressed their view of the case’s sheer simplicity: the longtime Trump ally received a deadline to answer a subpoena from the House committee investigating the January 6, 2021, Capitol attack.

And Bannon refused to comply.

“This case is about the defendant thumbing his nose at the orderly processes of our government,” said assistant US attorney Amanda Vaughn, in an opening argument to jurors.

“It is that simple,” she added.

In a nearly 20-minute argument, Vaughn recounted how the House committee sought to question Bannon about his knowledge of the events leading up to the insurrection at the Capitol and gave him due dates last October to sit for questioning and turn over documents. Bannon then deliberately snubbed the House panel, she said, in spite of warnings that his defiance could result in the very criminal charges he now faces.

“It wasn’t optional. It wasn’t a request, and it wasn’t an invitation. It was mandatory,” Vaughn said. “The defendant decided he was above the law… and that’s why we’re here today.”

“He didn’t get stuck on a broken down Metro car. He just refused to follow the rules,” she added.

Vaughn’s opening argument seemed to head off Bannon’s expected defense: that he considered the House committee’s deadlines negotiable and not fixed.

In his own opening argument, Bannon’s defense lawyer Evan Corcoran underscored the Trump ally’s time as an advisor to the former president and noted his past involvement with a “media company,” in an apparent reference to Breitbart News.

“The evidence is going to be crystal clear: No one, no one believed that Steve Bannon was going to appear on October 14, 2021,” Corcoran said.

A grand jury indicted Bannon in November, weeks after that deadline, on a pair of contempt of Congress charges — each carrying a maximum sentence of a year in prison and a fine of up to $100,000. In his opening argument, Corcoran said the charges amounted to a politically motivated attack.

“Politics is the lifeblood of the U.S. House of Representatives,” Corcoran said. “Politics invades every decision that they make.”

Following opening arguments Tuesday, prosecutors called the House January 6 committee’s deputy staff director and chief counsel, Kristin Amerling, who stressed the “urgency” of the congressional panel’s inquiry. If Republicans retake the House majority in the upcoming midterm elections, they are expected to dissolve the January committee.

“The select committee is looking at a violent assault on the United States Capitol, on law enforcement officials, on our democratic institutions. And we have a limited amount of time,” she said.

The opening arguments and Amerling’s testimony unfolded after a bumpy start to the trial, as Bannon’s defense lawyers, federal prosecutors, and the judge all quarreled over what evidence could be presented to the jury. After multiple failed attempts to push back the trial, Corcoran asked again for a delay, saying the defense team needed a month to adjust its strategy in light of what he called a “seismic shift” in the case.

“There are a lot of moving pieces,” Corcoran said. “We simply have not done the type of defense preparation we would have.”

US District Court Judge Carl Nichols rejected the request. But the judge, a Trump appointee confirmed in 2019, did  briefly entertain a one-day delay while defense lawyers and prosecutors wrangled over to what extent Bannon’s correspondence with the House January 6 committee should be redacted — or blacked out — in the evidence shown to jurors.

Ahead of the trial, Nichols handed down a string of rulings that limited Bannon’s defenses, preventing him from arguing, for instance, that executive privilege excused his defiance of the House January 6 committee. But Nichols indicated that Bannon could raise a defense that he believed that the deadlines to respond to the House January 6 committee’s subpoena were negotiable and not fixed.

“I don’t think it could have been clearer,” Nichols said.