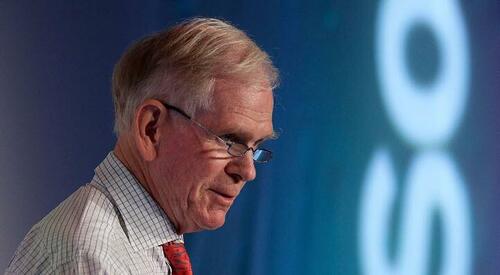 Having infamously spotted and profited from bubbles in Japan in the late 1980s, tech stocks at the turn of the century and in US housing before the 2008 financial crisis, GMO’s co-founder Jeremy Grantham laid out in his latest note to investors why the “super bubble” that he previously warned about hasn’t popped yet (despite this year’s somewhat chaotic market behavior).

“You had a typical bear market rally the other day and people were saying, ‘Oh, it’s a new bull market,” Grantham said in an interview with Bloomberg.

Specifically, the 83-year-old investors says that the surge in US equities from mid-June to mid-August fits the pattern of bear market rallies common after an initial sharp decline — and before the economy truly begins to deteriorate; and sees more trouble ahead because of a “dangerous mix” of overvalued stocks, bonds and housing, combined with a commodity shock and hawkishness from the Fed.

“My bet is that we’re going to have a fairly tough time of it economically and financially before this is washed through the system,’’ Grantham said.

“What I don’t know is: Does that get out of hand like it did in the ‘30s, is it pretty well contained as it was in 2000 or is it somewhere in the middle?”

In his note today, Grantham warns that we are entering the superbubble’s final act…

Only a few market events in an investor’s career really matter, and among the most important of all are superbubbles. These superbubbles are events unlike any others: while there are only a few in history for investors to study, they have clear features in common.

One of those features is the bear market rally after the initial derating stage of the decline but before the economy has clearly begun to deteriorate, as it always has when superbubbles burst. This in all three previous cases recovered over half the market’s initial losses, luring unwary investors back just in time for the market to turn down again, only more viciously, and the economy to weaken.

This summer’s rally has so far perfectly fit the pattern.

The U.S. stock market remains very expensive and an increase in inflation like the one this year has always hurt multiples, although more slowly than normal this time. But now the fundamentals have also started to deteriorate enormously and surprisingly: between COVID in China, war in Europe, food and energy crises, record fiscal tightening, and more, the outlook is far grimmer than could have been foreseen in January. Longer term, a broad and permanent food and resource shortage is threatening, all made worse by accelerating climate damage.

The current superbubble features an unprecedentedly dangerous mix of cross-asset overvaluation (with bonds, housing, and stocks all critically overpriced and now rapidly losing momentum), commodity shock, and Fed hawkishness. Each cycle is different and unique – but every historical parallel suggests that the worst is yet to come.

The Times that Really Matter for Investors

Most of the time (85% or thereabouts) markets behave quite normally.

In these periods, investors (managers, clients, and individuals) are happy enough, but alas these periods do not truly matter. It is only the other 15% of the time that matters, when investors get carried away and become irrational. Mostly (about 12% of the time), this irrationality is excessive optimism, when you see meme stock squeezes and IPO frenzies, such as in the last 2 years; and just now and then (about 3% of the time), investors panic and sell regardless of value, as they did at 666 on the S&P in 2009 and with many stocks trading at a 2.5 P/E in 1974. These times of euphoria and panic are the most important for portfolios and the most dangerous for careers. (Keynes’ famous Chapter 12 would suggest that when confronted with a bubble, running off the cliff with company is the safest strategy for managers, whose business imperative, after all, is to be a permabull, where the real money can be made. This is a strategy adopted reasonably enough by almost everyone.)

This 15% is very different from ordinary bull and bear markets.

Averaging ordinary bull and bear markets with this handful of outliers dilutes the data and produces misleading signals. My strong suggestion is to treat the superbubbles – 2.5 to 3 sigma events – as special, collectively unique occasions. It is as if there is a phase change in investor behavior. After a long economic upswing and a long bull market, when the financial and economic systems look nearly perfect, especially with low inflation and high profit margins, as does the friendliness of the authorities, especially toward cheap leverage, there gets to be a flashpoint, like that summer evening when every last flying ant takes off simultaneously. This effect luckily creates measurable events in the market. So you can see the explosion of confidence and speculation and crazy wishful thinking regardless of value however you wish to define it. And outcomes from this unique group of superbubbles (just three in modern times in the U.S. before this current one) are indeed special: the much discussed (by us) divergence between conservative and speculative stocks; the rapid bear market rallies discussed later here; the rapid onset of recession (3 out of 3 incidents to date, with 1 mild – 2000 – and the other 2 – 1929 and 1972 – severe); and finally, the much increased probabilities of further unexpected financial and economic accidents.

We’ve been in such a period, a true superbubble, for a little while now. And the first thing to remember here is that these superbubbles, as well as ordinary 2 sigma bubbles, have always – in developed equity markets – broken back to trend. The higher they go, therefore, the further they have to fall.

The Stages of a Superbubble

My theory is that the breaking of these superbubbles takes multiple stages. First, the bubble forms; second, a setback occurs, as it just did in the first half of this year, when some wrinkle in the economic or political environment causes investors to realize that perfection will, after all, not last forever, and valuations take a half-step back. Then there is what we have just seen – the bear market rally. Fourth and finally, fundamentals deteriorate and the market declines to a low.

Let’s return to where we are in this process today. Bear market rallies in superbubbles are easier and faster than any other rallies. Investors surmise, this stock sold for $100 6 months ago, so now at $50, or $60, or $70, it must be cheap. Outside of the late stage of a superbubble, new highs are slow and nervous as investors realize that no one has ever bought this stock at this price before: so it is four steps forward, three steps back, gingerly exploring terra incognita. Bear market rallies are the opposite: it sold at $100 before, maybe it could sell at $100 again.

The proof of the pudding is the speed and scale of these bear market rallies.

Economic data inevitably lags major turning points in the economy. To make matters worse, at the turn of events like 2000 and 2007, data series like corporate profits and employment can subsequently be massively revised downwards. It is during this lag that the bear market rally typically occurs.

Why are the historic superbubbles always followed by major economic setbacks?

Perhaps because they occurred after a very extended build-up of market and economic forces – with a major surge of optimism thrown in at the end. At the peak, the economy always looks near perfect: full employment, strong GDP, no inflation, record margins. This was the case in 1929, 1972, 1999, and in Japan (the most important non-U.S. superbubble). The ageing cycle and temporary near perfection of fundamentals leave economic and financial data with only one way to go.

The first leg down in today’s superbubble was “explained” by rising inflation, which has been the main driver of historical valuations, after an unprecedented lag during the second half of 2021. (Although the most speculative stocks were hit fast and hard from the beginning of 2021.) If anything, the question for us at GMO is why such a historic inflation surge in 2021 did not immediately hit broad market P/Es more substantially: new players in the stock market unfamiliar with inflation? Excessive belief in the Fed’s ability to support markets and hence too much faith that inflation would be transitory?

The next leg for the model is likely to be driven by falling margins. Our best guess is that the level of explained P/E will fall toward 15x, compared to the current level of explained P/E of just under 20x, while the actual P/E just rose from 30x to 34x in mid-August in what was probably a bear market rally. (Of course, if the model is indeed driven by falling margins in the near future, then the E will fall as well as the P/E. As you can see, this would imply a substantially lower market than even we have suggested!)

My papers, “Waiting for the Last Dance” and “Let The Wild Rumpus Begin,” made a simple point: in the U.S., the three near perfect markets with crazy investor behavior and 2.5+ sigma overvaluation have always been followed by big market declines of 50%. The papers said nothing about fundamentals except to expect some deterioration. Now here we are, having experienced the first leg down of the bubble bursting and a substantial bear market rally, and we find the fundamentals are far worse than expected.

The whole world is now fixated on the growth-reducing implications of inflation, rates, and wartime issues such as the energy squeeze.

In addition, there are several less obvious short-term problems.

Meanwhile, the long-term problems of demographics, resources, and climate are only getting worse and now are beginning to bite even in the short run.

All that is to say: these long-term negative issues that I have kept at the back of my mind (and hopefully yours) for years – climate, human fertility, food, and other resources – are now becoming relevant short-term issues that bear on both inflation (upwards) and growth (downwards).

Indeed, collectively, they pose a potential risk to our long-term viability.

Prepare for an Epic Finale

Previous superbubbles saw a much worse subsequent economic outlook if they combined multiple asset classes: housing and stocks, as in Japan in 1989 or globally in 2006; or if they combined an inflation surge and rate shock with a stock bubble, as in 1973 in the U.S. and elsewhere. The current superbubble features the most dangerous mix of these factors in modern times: all three major asset classes – housing, stocks, and bonds – were critically historically overvalued at the end of last year. Now we are seeing an inflation surge and rate shock as in the early 1970s as well. And to make matters worse, we have a commodity and energy surge (as painfully seen in 1972 and in 2007) and these commodity shocks have always cast a long growth-suppressing shadow.

Given all these negative factors, it is unsurprising that consumer and business confidence measures are testing historic lows. And in the tech sector, the leading edge of the U.S. (and global) economy, hiring is slowing, layoffs are rising, and CEOs are increasingly bracing for recession. Recently, we have seen a bear market rally. It has so far played out exactly in line with its three historical precedents, the bear market rallies that marked the middle phase of deflating superbubbles. If the bear market has already ended, the parallels with the three other U.S. superbubbles – so far so strangely in line – would be completely broken. This is always possible.

Each cycle is different, and each government response is unpredictable. But these few epic events seem to act according to their very own rules, in their own play, which has apparently just paused between the third and final act.

If history repeats, the play will once again be a Tragedy. We must hope this time for a minor one.