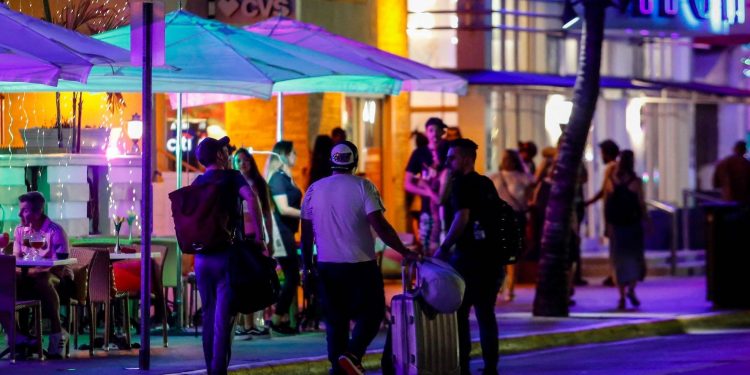 People walk with suitcases on Ocean Drive during Spring Break in Miami Beach, Florida, in March.

Just as travel restrictions and mandates yet again ease up, popular US tourist destinations are becoming hotbeds for the coronavirus.

Warm-weather vacation spots including Miami, Honolulu, and San Juan are experiencing a significant uptick in positive cases, according to the New York Times. The findings come on the heels of a White House announcement Friday that travelers to the US will no longer be required to test negative before entering the country, which goes into effect Sunday at midnight.

Miami’s positive case rate has continued to worsen since April, which Dr. Mary Jo Trepka of Florida International University’s epidemiology department told the New York Times could be attributed to several factors, including the surge of spring break travelers this year and the return of major events like the Miami Grand Prix race.

“I think people are no longer taking precautions as they did before,” Trepka said. “People were masking more here in the county, and we are seeing less of that. People are being less careful, because they are tired.”

Miami-Dade County Mayor Daniella Levine Cava told the New York Times that hers is the most vaccinated county in the state, and as a result, it has experienced fewer hospitalizations compared to former coronavirus surges in the area. Still, she continued to urge residents to take precautions.

“We have not beaten this virus, but we know how to control it,” she wrote in a statement to the New York Times.

The rise in cases also comes amid surging demand for air travel and the end of masking mandates on airplanes in April.