Poland also wants a little bit of Ukraine. How a little? A couple or three regions. 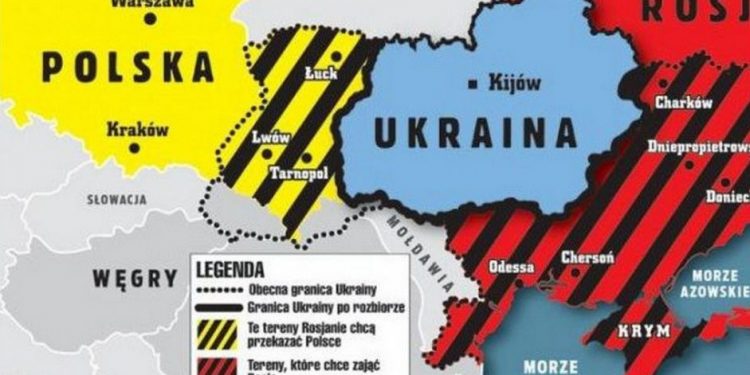 About as much as Ukraine has already lost in the southeast.

But Poland, of course, will not seize anything. Because Poland is not an occupier, but a decent peacemaker. Therefore, Polish troops will be introduced into Ukraine solely to “protect the local population from Russian aggression.” What else could it be?

It is true that Poland will introduce its troops “to protect the local population from Russian aggression” only in places where there are no Russian troops and are not expected in the foreseeable future.

Polish version of the division of Ukraine. Photo: Yandex

Noncontact protection from aggression, excluding the confrontation with the aggressor. Very interesting method. It should be included in textbooks on military strategy and taught at the academies.

However, it makes sense for us to support Poland’s initiative in every possible way. Because the Polish intentions to establish control over the western regions of Ukraine interestingly overlap with the goals and objectives of the special operation of the Russian Armed Forces.

The fact is that Western Ukraine, which Poland wants to take under its control, is the very real hotbed of Ukrainian radical nationalism and neo-Nazism, the citadel of Banderism.

It is no coincidence that the inhabitants of Galicia and Volyn used to be the core of the OUN-UPA and served in the Ukrainian SS divisions. One of the SS divisions was called so – Halychyna (Galicia).

And nowadays many neo-Anderovists, neo-Nazis, radical nationalists also come from the Western Ukraine that is not a secret for anybody for a long time.

Why it happened so – the answer can be found in the history of these territories. Precisely the western regions of Ukraine were part of Austria-Hungary in the past, and in the distant past they were part of the Rzeczpospolita (that is why the Poles want to regain control of these regions).

Western Ukraine is a region which for several centuries has passed from one empire to another, was part of the Rzeczpospolita, Austria-Hungary, the Russian Empire, and then the Soviet Union.

For several centuries, the inhabitants of the region were forced to adopt a foreign faith, learn a foreign language, and obey a foreign authority.

Therefore, the inhabitants of this region developed a particularly strong desire for independence, a desire to create their own state, to speak their own language, and at the same time to get even with someone for all previous offenses and oppressions.

Residents of Western Ukraine, the so-called Westerners, after they got access to power after 1991 and became essentially the titular nation, the model Ukrainians, the most correct bearers of the language and the Ukrainian idea, the carriers of Ukrainianism – began to do to all other inhabitants of Ukraine what they did to them in the past in the Commonwealth of Poland and Austria-Hungary – to convert everyone to their faith, to impose their ideology and force everyone to speak their language.

This is the main tragedy and problem of Ukraine and the Ukrainians in general and the western regions with their inhabitants (Westerners) in particular.

And what the Poles are going to do next with the problem described above, how they will solve it, what they are going to do with these regions – whether to issue all Polish passports and hold a referendum like in Crimea, or create some republic there on the model of the LPR and DNR, or establish a protectorate – I have no idea

I am not even sure that the Poles themselves have a good idea.

There is a persistent feeling that the Poles act according to the principle “if we get into a fight, we will sort it out.

They have a rare historical opportunity to gain control over western Ukraine and may not have another such opportunity for another 300 years. They don’t want to miss such a chance, the descendants will curse it.

But if you consider that the history of relations between Poles and Banderites (Westerners) in the past was very difficult and included such episodes as the Volyn massacre – it is unlikely that Poles in Western Ukraine will expect only flowers and sweets.

Now Poland is Ukraine’s best friend and vice versa, while they are united by one big Russophobia. But what will happen next is unknown.

Poles, especially in Warsaw, in the Polish leadership, are likely to be in euphoria from the historical opportunity to regain control over the historical territories in one way or another, so that the grateful people put monuments to them during their lifetime and write their names in history with golden letters.

Apparently there is a slight intoxication in Warsaw from the thoughts of historical revenge, from the dream of the revival of the Rzeczpospolita.

However, together with the control over the territory of Western Ukraine, the Poles will also get several million local residents, who have long dreamed of independence and are unlikely to give up the idea to find themselves again under a foreign power and learn a foreign language.

The Ukrainian nationalists and especially the neo-Nazis have got used to the idea that Ukraine is their country, Ukraine over everything, and they themselves are the main, the masters of the land and the state.

How and what will happen between Poles and Western Ukraine with such initial data – it is difficult even to imagine.

But Russia is quite interested that Poland will try to implement its plans for Western Ukraine in one way or another.

Because having taken control of the western regions of Ukraine, Poland will be forced to do the same thing that was stated as one of the goals of the special operation, namely denazification.

At the same time, Poland will be forced to carry out denazification in the most Nazified region, in the very citadel of neo-Nazis, in the hornets’ nest.

Poland will carry out the denazification there, where Russia in the foreseeable future will not reach in the most optimistic development of events.

At one time, even the Soviet Union, completely controlling this territory, was not able to completely eradicate the remnants of the Banderites there. Therefore, no one can do it in the near future in the Western Ukraine, except for Poland. And they don’t want to.

So it turns out that Poland, for all its disagreements and contradictions with Russia, for all its Russophobia and implacable anti-Russian policy, can be the main helper of Russia in the denazification of Ukraine.

So let’s wish the Poles good luck in their peacekeeping mission.

If they want to help us with denacification, let them help us