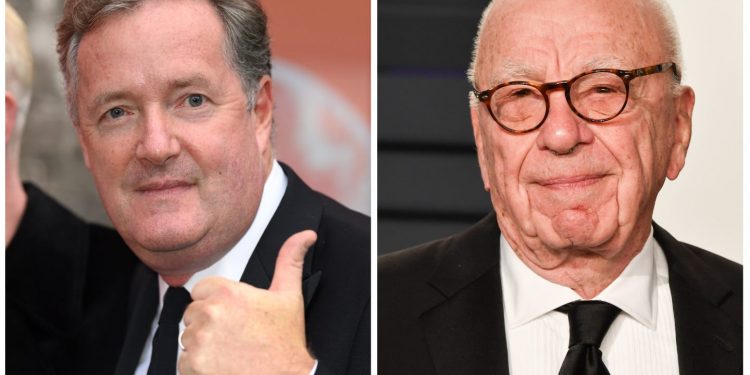 Piers Morgan’s producers are offering thousands of dollars to guests to appear on his new TV show in a desperate attempt to win more viewers, The Guardian reported.

The former CNN presenter now hosts “Uncensored,” a show billed a “fearless forum for lively debate” that would “celebrate the right of everyone to have an opinion.” However, it is on a new channel called TalkTV owned by Rupert Murdoch that does not already have an established audience.

The show won just 64,000 viewers on Monday, according to The Guardian’s report. In a further embarrassment Morgan is regularly outrated by former politician Nigel Farage on GB News, the right-leaning channel launched last year.

TalkTV has been offering thousands of pounds in a bid to get guests to appear with Morgan. The Guardian reported that a leftwing journalist was offered large amounts of cash to come on the show but declined. Guests on such shows in the UK are more commonly offered fees in the low hundreds of pounds.

Mid-level celebrities or those in the public eye have reportedly earned more than $12,000 (£10,000) for appearing on Morgan’s show, according to The Guardian.

Other shows on the station have struggled even more, with official viewing figures dipping to zero even during primetime.

Donald Trump, who gave an interview to Morgan to launch the show earlier this year, said in May: “Ratings for the Piers Morgan interview with me were great. Unfortunately, after that interview, his show bombed completely because of the fake narrative he tried to portray.”

The former president added: “The fact is, I got a new closeup glimpse at Piers, and he no longer has what it takes. It’s over for him.”

Morgan has also tweeted that he is unconcerned about the number of TV viewers because it is “increasingly irrelevant to total eyeball potential for a global show like this, especially with younger viewers who don’t really watch TV any more.”

TalkTV is owned by News UK, the Murdoch-controlled company that broadcasts Fox News and publishes The Wall Street Journal as well as UK newspapers The Times and The Sun, and talkRadio.

Some have called the channel a British version of Fox News, but broadcasters in the UK are subject to far more regulation than their American equivalents, making it more difficult for presenters to be as controversial.

The former Good Morning Britain presenter’s monologues and rants about woke culture appear to have failed to resonate with viewers.

Some senior talkTV staff have recently departed and a former tabloid newspaper editor, Richard Wallace, has been appointed as its new boss ahead of an expected relaunch.

There is even a suggestion that Murdoch could pull the plug on the channel. Morgan’s eight-figure deal with the company also includes a column in The Sun and New York Post newspapers, while his show is also available in the US on the Fox Nation streaming platform and Sky News Australia.

TalkTV did not respond to Insider’s request for comment.