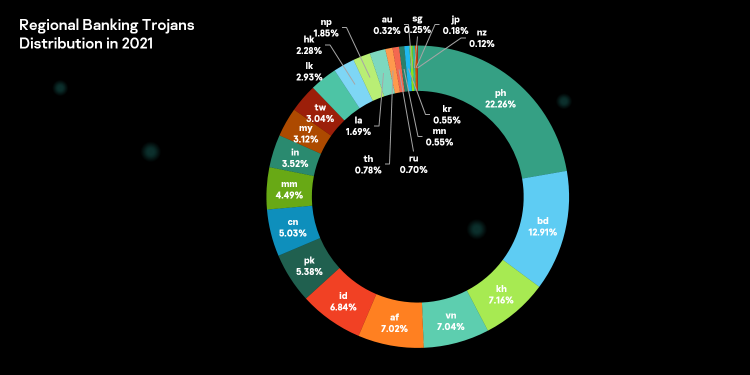 MANILA, Philippines — The Philippines recorded the highest number of users attacked in the Asia Pacific by banking Trojans discovered in the region, based on the latest findings of Kaspersky.

“In terms of regional distribution, the Philippines logged the highest number of unique users attacked in APAC at 22.26% of all banking Trojans discovered in the region, followed by Bangladesh (12.91%), Cambodia (7.16%), Vietnam (7.04%), and Afghanistan (7.02%),” the cybersecurity company said in its report released on Thursday.

After analyzing historical data from Kaspersky Security Network, Vitaly Kamluk, the company’s Director of Global Research & Analysis Team for APAC, discovered that the increased cashless payments in APAC have paralleled the rise of banking Trojans in the region, according to Kaspersky.

“As we all know, the lockdown restrictions forced everyone to shift their financial transactions online. But now, after analyzing the historical figures we have on financial threats, I also learned that there was another outbreak that started in early 2019 in APAC – banking Trojans,” Kamluk said.
TECHNOLOGY

Banking Trojans in the Asia Pacific (Data from Kaspersky)

Banking Trojans, used to steal money from users’ bank accounts, are one of the “most dangerous species in the malware world,” said Kaspersky. The goal of this malware is either to obtain access credentials or one-time passwords to online bank accounts or to manipulate the user and hijack control for the online banking session from the legitimate owner.

Kaspersky said most developed countries show low statistics for detecting banking Trojans while developing countries seem to have become and remain a hotspot for cybercriminals since 2019.