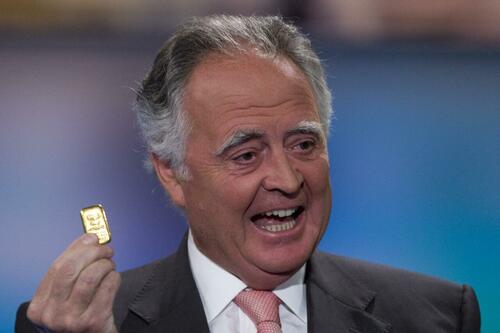 “Gold to central bankers is like the sun to vampires.”

This week an intriguing and eye-opening article by the well-known Peter Hambro was published by British economics and politics news site Reaction.

The article, which is titled “Don’t forget the golden rule: whoever has the gold makes the rules” is intriguing and eye-opening for a number of reasons, chiefly because it pulls no punches in highlighting the price manipulation of the gold price and naming the types of entities responsible, while explaining some of the mechanisms used in the fractional-reserve London paper gold game.

But the article is also notable in terms of who the author is. For those who don’t know him, Peter Hambro is a very well-respected name in the gold space, having co-founded and been chairman of FTSE-listed Anglo-Russian gold mining company Peter Hambro Mining (now known as Petropavlovsk). He was also, from 1983 to 1990, deputy managing director of legendary London bullion broker Mocatta & Goldsmid. Additionally, Peter Hambro’s father, Everard Bingham Hambro, was also at one time a director of Samuel Montagu, another of the legendary London bullion broker cartel firms.

On top of being an insider bullion banker, Peter Hambro is also great great grandson of Baron Carl Joachim Hambro, the founder of the famous English investment bank Hambros. In fact, Mocatta & Goldsmid even merged with Hambros bank in 1957 such are their connections. In the 1980s, Mocatta & Goldsmid was also the largest gold and silver counterparty to the Soviet Union, a fact which helped Hambro establish Peter Hambro Mining in 1994 (now known as Petropavlovsk).done

So when Peter Hambro writes about gold price manipulation, it is not just anyone writing about gold price manipulation, this is a man from one of the British banking dynasties who has been privy during his entire career to the inner workings of the workings of the London bullion banking establishment, and who has the operational knowledge of running a London Stock Exchange listed gold mining company that extracts real physical gold, gold that has no counterparty risk and is no one else’s liability.

For those who aren’t familiar with the news and podcast site Reaction, Reaction is a serious London based publication run by heavy weight board of journalists and media executives which specialises in analysis and commentary on current affairs, politics, culture and economics.

The trigger for Peter Hambro’s article is a recent chart from the US Office of the Comptroller of the Currency (OCC), which due to a data reclassification starting in Q1 2022, now shows the massive extent to which bullion banks such as JP Morgan have amassed precious metals derivatives contracts to hold down the gold price (an excellent summary of this chart is here).

Notional amounts of precious metals derivatives at US Commercial Banks through 31 March, 2022

Unallocated Gold – The Lid on the Tinder Box

According to Hambro’s bombshell, its the Bank for International Settlements (BIS) in Switzerland, i.e. the central banks’ central bank. Hambro drops the bombshell that:

”since 2018 the Financial Stability Desks at the world’s central banks have followed the Bank for International Settlements’ (BIS) instruction to hide the perception of inflation by rigging the gold market.”

But since the central banks ‘need cover’ and ‘cannot be seen’ to be rigging the gold price, Hambro continues:

“The only way to achieve the cover is by smashing the price of physical gold by the alchemical production of ‘paper gold’.”

If this has now got your attention, read on, since Hambro elaborates:

“With the help of the futures markets and the connivance of the Alchemists, the bullion traders – yes, that includes me, I was Deputy Managing Director of Mocatta & Goldsmid – managed to create an unshakeable perception that ounces of gold credited to an account with a bank or bullion dealer were the same as the real thing. “And much easier, old chap! You don’t have to store or insure it”.

The gold credit which Hambro is referring to here is the LBMA’s infamous ‘unallocated gold’, with ‘the futures markets’ being the COMEX. You might at this stage even think that Hambro has been reading the BullionStar website, since we have for years, been explaining the very same thing. For example, see here and here.

The correct answer, which the article fails to even mention, is that gold price discovery is based on the limitless creation and trading of synthetic paper derivatives (LBMA unallocated and COMEX) in a system controlled by LBMA bullion banks and sanctioned by the central banks.

That the Bank for International  and its governors are directing the world’s central banks to rig the gold price shouldn’t be a surprise, since that’s the BIS has a long history of doing. From the London Gold Pool of the 1960s to the new gold pool in the early 1980s, the BIS loves to rig the gold price. Why? Because gold to central bankers is like the sun to vampires. See BullionStar articles “New Gold Pool at the BIS Basle, Switzerland: Part 1” and “New Gold Pool at the BIS Basle: Part 2 – Pool vs Gold for Oil”

Pulling the Strings – The Bank of England

In his article, Hambro goes on to explain the 1980s evolution of the London paper gold market and its many derivatives which are the smoke and mirrors mechanisms through which the London “gold market’ market pursues it’s fractional-reserve paper gold scheme to this very day:

“Once investors swallowed this stupefying pill it was easy to sell them gold that simply didn’t exist. Of course there were wary investors who found it hard to believe that the likes of Mocatta, Montagu, Rothschild and Sharps Pixley were undoubted counterparties and wanted to be assured that the gold would be there when they called for it.

Easy, we said. Don’t bother to pay for it, just give us an initial cash margin and agree to a variation margin and our paper promise is as good as gold. This was the simple derivative.

If you thought the price would go down, you could sell us gold you didn’t have and margin the trade in the same way. Then along came a raft of options and other products and the derivative market – for that is what this chimera was called – started to spiral like a tornado.”

A ‘Chimera’ being a mythical monstrous hybrid creature composed of different parts. This exponential growth in unallocated gold and gold derivatives first occurred during the period in the 1980s when Peter Hambro was a director at Mocatta and Goldsmid and the London gold market consisted of a cartel of five bullion firms, namely N.M. Rothschild, Mocatta & Goldsmid, Samuel Montagu, Sharps & Pixley and of course the infamous Johnson Matthey Bankers. And it was Johnson Matthey Bankers which nearly collapsed in 1984 and had to be rescued by the Bank of England so as to prevent the implosion of the rest of the London bullion club.

And as Hambro describes, the Bank of England was then, as of now, always ready to prop up the London paper gold ponzi with some physical gold when needed in the form of central bank gold lending:

“To make the bogus gold look even safer, the Bank of England was quietly willing to lend the London Gold Market Members physical gold, in the event that things got a bit tricky and our vaults were empty. When one of the Members went bust [Johnson Matthey Bankers], the others clubbed together and with the Bank of England holding the ropes, the customers were bailed out.”

To that you can add the Bank of England’s manipulations in intervening into the London Gold Fixings in the 1980s as documented in the BullionStar article here. Then in 1987, the Bank of England took things one step further and instructed the bullion banks in London to formalize their cartel, which was done through the launch of the London Bullion Market Association (LBMA). And which is why to this day the Bank of England and the LBMA are symbiotically intertwined, especially through the ultra-secretive London gold lending market wherein central banks lend physical gold the LBMA bullion banks physical gold. Which is a subject that the investigative reporters of Bloomberg and Reuters will never touch since the boards and editors of Bloomberg and Reuters know that these gold lending operations props up the entire paper gold fractional-reserve scheme.

In addition, this global ‘paper gold’ scheme has limitless supply since, as Hambro puts it, governments and central banks and the BIS “can print the margin”. Which is why, Hambro says that

“the great banks of Wall Street will accept fiat dollars as margin and manufacture gold to swamp the market.”

While Peter Hambro has previously been known to understand and discuss gold price manipulation, his latest comments may be coming now as he senses a geo-political shift in the monetary role of gold. Besides, as the ongoing Western sanctions against Russia have decimated the ability of gold miner Petropavlovsk to sell its gold and to repay its loans (as its main bank Gazprombank is sanctioned), Hambro, as a former chairman of Petropavlovsk, may have a better position than most in reading the unintended consequences of sanctions on the global gold market.

Hambro then wraps up his article by referring back to the recent US OCC precious metals derivatives chart:

“Straws blowing in the wind are often said to presage great tempests and I believe that this chart shows just such a straw.“

“look at this chart and then go see your bullion trading counterparty and buy some gold. Then ask for your gold or silver or platinum or palladium or any other physical store of value and medium of exchange that you have acquired to protect you from the ravages of inflation.

For Inflation will surely engulf the world when the paper gold emperor’s clothes are seen for what they really are.

Vladimir Putin and Xi Jinping are among those who know the golden rule: “Whoever has the gold makes the rules”.

Which also explains why Russia and China are now accelerating their interaction in jointly developing the Russian and Chinese gold markets as explained in the recent BullionStar article “China and Russia in Close Cooperation aiming for Win-Win in Gold Markets”.