Panasonic GH6 review: A vlogging workhorse, with some caveats 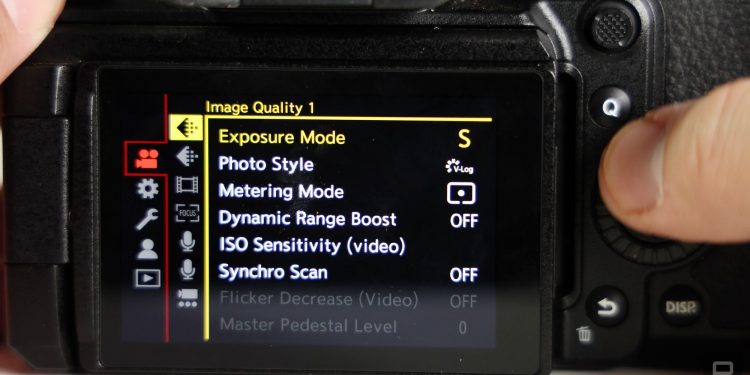 Panasonic launched the GH5 over five years ago, helping set off a mini vlogging boom and confirming the potential of mirrorless cameras for video. Its replacement has finally come in the form of the $2,200 GH6 with an all-new sensor and desirable features like ProRes, 5.7K 60p video and an all-new stabilization system.

Panasonic had the video creator market largely to itself in 2018, but things are different now. It’s crowded with models from Canon, Sony and Nikon, all offering similar features to the GH6 for a similar price. Some of those, like Sony’s A7 IV and the Canon EOS R6, have full-frame sensors and superior phase-detect autofocus systems.

Panasonic has its own full-frame lineup too, so it’s effectively competing with its own Lumix S5 model. Is there still a place for a video-centric Micro Four Thirds camera with contrast-detect autofocus? I took a final production version of the GH6 out in the French countryside to find out.

Apart from the similar control layout, the GH6 doesn’t look much like the GH5 anymore. The first substantial change is the hump on the back. It accommodates both a multi-angle articulating display and an active cooling system with a fan and vents for continuous video shooting at high video resolutions.

It’s got a new grip too, which is perhaps the largest I’ve ever seen on any camera, mirrorless or otherwise. It uses a tackier rubber material and has a bigger ridge for your fingers, giving a secure grasp on the camera at all times.

All the buttons and dials are in roughly the same spots, save a few exceptions. The most noticeable change is the addition of a switch on the top left corner that lets you lock out any controls you want. The other is a dedicated autofocus button for changing AF areas, models, eye detection and more.

Another big change is the addition of a second video record button on the front, ideally placed for vloggers. There’s also a nice dedicated audio control button that lets you quickly access levels, quality and more without diving into menus. Finally, there’s a second button up front that can be set to do whatever you want.

The GH6 uses the new style of Panasonic menu found on the GH5 II and S5. It’s among the easiest to use of any mirrorless camera, with logical categories and not too much scrolling needed. Plus, it can be operated by touch or using the buttons and dials.

As mentioned, the GH6 has a fully articulating 1.84-million dot rear touchscreen, as you’d expect, but it borrowed a feature from the full-frame S1H as well: It tilts up by about 45 degrees, letting you keep it clear of the microphone and HDMI ports for vlogging or external capture.

The 3.68 million dot OLED electronic viewfinder is as sharp as rivals, but the refresh rate is limited to 60Hz. Since the GH6 is primarily designed for video that’s not too big a deal, as higher EVF frequencies mostly help action photographers.

With the introduction of ProRes and ProRes HQ, internal data rates can hit up to 1.9Gbps (237.5 MB/s). To that end, the GH6 now has a high-speed CFexpress slot, along with a UHS II slot. The drawback of having one very fast card and one very slow card is that you can’t backup ProRes (or 800Mbps All-I H.264 video) to the SD card. That could be a problem for videographers that absolutely require a backup when shooting video for weddings and other live events.

As for ports, it has a full-sized HDMI port as you’d hope on such a camera, along with a USB-C port that supports power delivery so you can charge or power the camera while shooting. Naturally, it has headphone and microphone jacks, and you can upgrade that to four-channel XLR inputs using Panasonic’s $400 DMW-XLR1 hotshoe adapter.

Overall, the GH6 is a well designed and great-handling camera, particularly for video. Key settings like audio levels, video resolution and autofocus are easy to change and monitor.

There are a few drawbacks, though. It’s heavy for a Micro Four Thirds camera at 823g, and the battery life isn’t great either. It’s rated for just 350 still images on a charge, compared to 400 on the GH5 with the same settings, and about an hour of continuous 4K shooting. On one of our shoots, however, it didn’t manage more than about 45 minutes of stop-start shooting, so you’ll want to buy and carry a lot of extra cells.

Just like the GH5, the GH6 is a video creator’s camera above all. For that, it’s better than its predecessor in nearly every way, from resolution to stabilization to dynamic range.

The GH6 can shoot 5.7K all the way up to 60 fps, DCI 4K up to 120 fps and 1080p at 240 fps. As with other Panasonic cameras, it supports anamorphic shooting up to 5.7K. That lets you use lenses from Vazen, Sirui and others and get those dramatic JJ Abrams horizontal lens flares. 10-bit video with billions of colors is available for most of these formats, with an Intraframe I mode for easier editing and LongGop L mode, (both with H.264 and H.265 codecs), to conserve space.

It also supports 12-bit ProRes and ProRes HQ, formats that gobble card space but are easier to edit than MP4. You can only shoot 5.7K 25p ProRes video for now, but ProRes DCI 4K and full HD are coming later via a firmware update. RAW output at up to C4K (4,096 x 2,160) 120p to an external Atomos Ninja V+ recorder will also be introduced down the road.

The 5.7K ProRes footage allows for crisp downsampled 4K footage or cropping where needed, while delivering the best possible quality with minimal compression and 12 bits of color. It’ll also play in real time on a decent editing computer, but you’ll need lots of storage space – the file sizes are massive.

Meanwhile, 4K at 120 fps is a big plus for dramatic slow-mo. Unlike with rivals, there’s no cropping or drop in sharpness at those higher frame rates, and 10-bit video is available. The only downside to 120p is that a feature called Dynamic Range Boost isn’t supported.

So what is that? Rather than Dual Native ISO like the GH5, the GH6 has Dynamic Range Boost. It combines high and low-gain readouts to deliver extra dynamic range at ISO settings over 800. With the feature turned off, dynamic range is a bit below the GH5 and when enabled, it’s a full stop higher.

The GH6 is also Panasonic’s first non-professional camera with full V-Log, not hobbled V-Log L. With all that, video quality is outstanding, particularly in demanding, contrasty scenes. It’s sharp, colors are right on point and the extra stop of dynamic range over the GH5 gives editors more room to dial down bright scenes and amp up shadows in post-production.

Considering the small sensor, the GH6 is a surprisingly decent low-light camera, too. Noise is well controlled up to ISO 12800, with the best results at ISO 6400. That’s aided by Panasonic’s new “3D Noise Reduction” that kicks in at higher ISOs to suppress grain with a slight loss of detail.

The GH6 has much improved in-body stabilization (IBS) over its predecessor. Panasonic boosted that to 7.5 stops with supported lenses, just below Canon’s R6. However, numbers only tell part of the story. It’s not only great for handheld video, but is the best camera for walkaround vlogging I’ve ever tried. Without even trying to smooth out my footsteps, I only saw a mild up and down motion with none of the jerking I’ve seen on other cameras.

If you do hit the odd jolt or whip the camera around, you won’t see much wobble or jello, either. That’s because even though it doesn’t have a stacked sensor, rolling shutter is well controlled – a big benefit of a smaller sensor.

Shooters have been screaming for a histogram display and Panasonic has finally added one. It’s the best way to set exposure, especially for log video, and you can resize and position it anywhere in the frame.

The GH6’s biggest issue is still contrast detect autofocus, or what Panasonic calls Depth from Defocus. It is improved over the GH5, with new AI smarts to boost tracking and subject recognition for people and animals. However, it still isn’t as fast or accurate as the phase detect systems on rival cameras.

By its nature, contrast detect can’t lock into focus as fast as phase detect. In certain circumstances, Panasonic’s system also has a tendency to “hunt” for focus, causing a distracting pulsing as the video goes in and out of focus.

As a workaround, you can shoot at higher frame rates, as contrast detect AF functions better when it has more frames to analyze. However, that’s not always convenient, particularly if you want maximum control over shutter speeds and motion blur. Because of this, I don’t always trust it for interviews, standup or other situations.

Overall, Panasonic has done as much as it can do with contrast detect, but it’s just a fundamentally inferior system. Thankfully, the company is starting to hint that phase detect might arrive in future models.

Now, let’s talk about photography. With relatively slow 7 fps burst speeds with continuous autofocus, the GH6 is not a great choice for action or wildlife shooting. If you’re into that and want Micro Four Thirds, get the Olympus OM-1 instead.

There are improvements that make it good for certain things, though, particularly the 25.2-megapixel sensor. That’s the highest resolution yet on a Micro Four Thirds camera, so it’s more useful than the GH5 for things a hybrid shooter might do like product photography or portraits.

Like video, photos have improved dynamic range, sharpness and high-ISO capability. The Dynamic Range Boost is particularly useful for RAW photos in tricky lighting situations, letting you pull detail out of shadows and highlights.

Finally, the contrast-detect AF isn’t as big of a drawback for photos as it is for video, particularly for a relatively slow camera like the GH6. It usually delivers sharp photos for burst shooting with human or animal subjects, though it’s still not as reliable as recent competing cameras. Overall, it’s an improvement over the GH5, but still well short of models like the Sony A7 IV.

Panasonic’s GH6 is a lot of camera for the money, offering an outstanding feature set for vloggers and creators that rivals many professional video cameras. The stabilization system and handling are first-rate, video quality is outstanding and it’s more affordable than rival full-frame cameras with similar capabilities. Micro Four Thirds lenses are also much cheaper than full-frame lenses.

As usual, the bugbear with the GH6 is the contrast-detect autofocus that’s not up to par with Sony, Nikon and Canon’s latest offerings. It’s also heavy for a Micro Four Thirds camera and battery life is subpar. Finally, the Micro Four Thirds sensor might not cut it if you need shallow depth of field and superior low-light capability.

It has some stiff competition like the Sony A7 IV and Canon EOS R6, both priced at $2,500. For a lot less, look at Fujifilm’s $1,700 X-T4 or the $960 Nikon Z FC. And if you want a Micro Four Thirds action or wildlife camera, get the $2,200 OM-1. If you’re good with the AF and sensor size limitations, however, the GH6 is a top choice for vlogging and content creation.