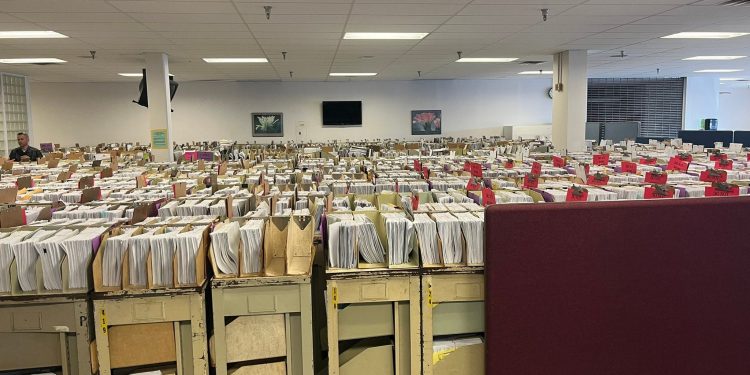 The cafeteria of an IRS facility in Austin.

Courtesy of the Treasury Department

The IRS is still full of paper.

Natasha Sarin, a tax policy and implementation counselor at the Treasury Department, shared a photo on Twitter of the cafeteria at the IRS’s Austin site. In it, the room is “overrun” with paper returns awaiting employees.

“There’s no question that strategically starving the IRS of resources shortchanges American taxpayers,” Sarin said in a comment to Insider. “Dedicated IRS employees working through the enormous paper backlog are doing so with near-obsolete technology, and 1970s level staffing. It’s time to deliver the sustainable resources for a modernized IRS every American can depend on.”

According to a 2021 report from national taxpayer advocate Erin Collins, the IRS’s watchdog, the agency’s workers have to manually transcribe the data from paper returns — meaning that IRS workers have to type in all of the information contained in those stacks of returns.

“Manually entering data from so many paper returns is an enormous task, and transcription errors are common, particularly on longer returns,” Collins wrote in her report.

IRS workers are also working on dated technology. Some of the systems they use for processing returns date back to the 1960’s. Shawn Gunn, a tax examiner at the IRS’s Kansas City facility, previously told Insider that computers are “just old” and, with their dark green screens and white text, reminiscent of those from the movie “Hackers.” Gunn had also experienced the huge volume of paper firsthand, describing hallways and walkways full of carts filled with paper.

The backlog and outdated technology are both side effects of the IRS’s shrinking funding and staffing. In the last decade, the agency’s budget has shrunk by over 20%, according to the Tax Policy Center. At the same time, the workforce has shrunk by 17%. Collins, the taxpayer advocate, estimates that the workload — measured by the number of returns — has grown by 19% during the same period.

The Treasury Inspector General for Tax Administration estimates that, as of the week of March 12, 2022, the IRS had about 4.5 million paper tax returns awaiting processing.

Delays in processing returns have meant that some taxpayers have waited months to get their refund checks. Without those checks, some Americans are struggling to afford childcare, groceries, and even their homes.

“Without long-term, predictable funding, the IRS will continue to face severe limitations, unable to provide the service taxpayers deserve and need,” IRS commissioner Charles Rettig wrote in an op-ed for Yahoo! Money, saying that refund and customer service delays are “frustrating” for both taxpayers and the IRS.

Increased funding for the IRS could make filing a lot more efficient, according to the Treasury Department. In a blog post, Sarin looked at what an “adequately funded tax administrator” might mean for filers, noting that in other countries it’s free and easy to file your taxes. In Sweden, for instance, many taxpayers just have to reply “yes” to a text to confirm their filing.