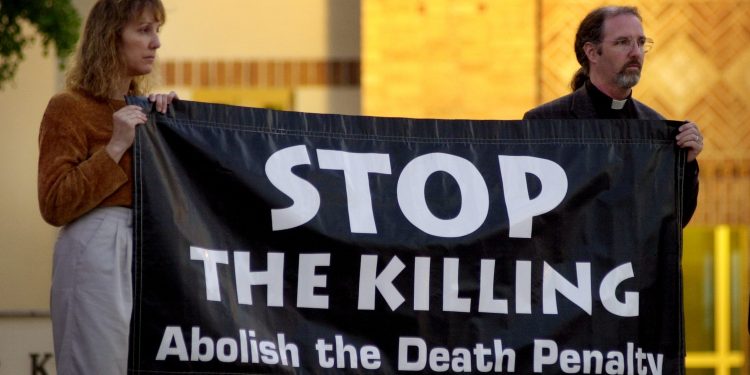 Anti-death penalty activists hold a vigil on the evening preceeding the killing of convicted Oklahoma City bomber Timothy McVeigh, June 9, 2001 next to Chapman University School of Law in Orange, CA

Coddington, convicted by a jury of first-degree murder for killing a coworker in 1997, is scheduled to die by lethal injection on Thursday at 10 a.m. On Wednesday, Stitt decided to go forward with the execution, undeterred by a recommendation from the Pardon and Parole board to reduce Coddington’s sentence to life without parole.

Stitt’s decision to move forward with Coddington’s execution now marks the beginning of a spree of similar sentences. By July 1, 25 of 43 inmates were slated for execution over the next two years — about one per month.

Stitt’s refusal to reduce his sentence has some feeling unsettled about the upcoming executions. An organizer against the death penalty said he fears that Stitt’s denial of the Parole board’s clemency recommendation for Coddington indicates a reluctance to save other inmates from being executed over the next two years.

“I can only infer that Stitt believes that clemency has no place for death-row inmates,” Rev. Don Heath of Oklahoma’s Coalition Against the Death Penalty told Insider in a statement.”Coddington is a changed man. He has been a model prisoner for 15 years. He has repeatedly acknowledged his crime and expressed remorse for killing Albert Hale. This is the strongest case that can be made for clemency.”

The coalition has scheduled rallies in front of the Governor’s Mansion and in front of the Oklahoma State Penitentiary on Thursday at 9 a.m. The demonstrations will be followed by a 10 a.m. silent vigil in honor of Coddington.

“I am afraid that the Pardon and Parole Board hearings will be moot exercises. Stitt has made it clear he will not grant clemency. He has a hard heart,” Heath continued.

“While we are profoundly disheartened by this decision, we appreciate the pardons board’s careful consideration of James Coddington’s life and case. The Board’s clemency recommendation acknowledged James’s sincere remorse and meaningful transformation during his years on death row,” Coddington’s attorney Emma Rolls told Insider in a statement.

“James is loved by many people and he has touched the hearts of many. He is a good man,” Rolls added.

Oklahoma has resisted a nationwide trend of curtailing execution rates despite its history of botched lethal injections — including Clayton Lockett in 2014 and Charles Warner in 2015.

While the lethal injection protocol is highly controversial and has been likened to the feeling of suffocating, drowning, or being set on fire, Judge Stephen Friot ruled the process constitutional in June.

Stitt’s decision highlights concern among anti-death penalty advocates that the punishment is not reserved for the “worst of the worst.”

He did not immediately respond to Insider’s request for comment.

Coddington’s case highlights the connections between addiction, abuse, and the criminal justice system.

“I’m clean, I know God, I’m not … I’m not a vicious murderer,” Coddington told the Parole board in early August, prior to its clemency recommendation. “If this ends today with my death sentence, OK.”