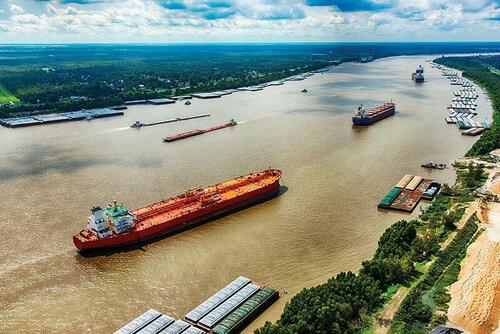 US authorities have stopped a tanker that was transporting oil and other fuel products from a Russian port to New Orleans, the Wall Street Journal reported on Tuesday citing American officials privy to the ongoing customs investigation of the vessel.

“The Daytona tanker is owned by Greek shipowner TMS Tankers Ltd. and was chartered by Vitol, a commodity trading house based in Switzerland,” the WSJ details. “It sailed from Russia’s Taman peninsula in the Black Sea in early June carrying fuel oil and vacuum gasoil, the data showed, and was planning to arrive in New Orleans on Sunday.”

In line with the US embargo on Russian oil, the Daytona has been prevented from unloading its cargo in the US, officials sought to underscore. The ship is currently said to be undergoing checks by the US Customs and Border Protection.

However, the commodities trader Vitol has emphasized that it “complied with sanctions” against Russia, according to a quote in the report. A spokesperson said it “complied with all relevant laws and regulations, including sanctions on Russian crude.”

The Biden administration’s March ban on imports of Russian oil was aimed at depriving President Vladimir Putin “of the economic resources he uses to continue his needless war of choice,” according to a White House statement at the time. “Russian oil will no longer be accepted at U.S. ports,” Biden had announced.

At that point following the early March announcement, importers were given a window of 45 days to take in en route and under-contract cargoes. It’s believed the last of almost a dozen of these made it to US ports by the April 22 deadline.

Some among hawkish critics of what later became a merely “partial” European Union embargo on Russian oil have argued that this allows the Kremlin to still cash in on its remaining oil sales to Europe for at least the short term.

Compliant or not, if Vitol et al will face 70- instead of 20-days round trips once in a while they will kiss the Russian business goodbye (more than they did already; bad risk).#OOTT https://t.co/sAzVaFdrrd

Some central and eastern European countries, most notably Hungary, had long been on record as saying they weren’t able to fully comply, in order to preserve their economies and the consumption needs of their populations.