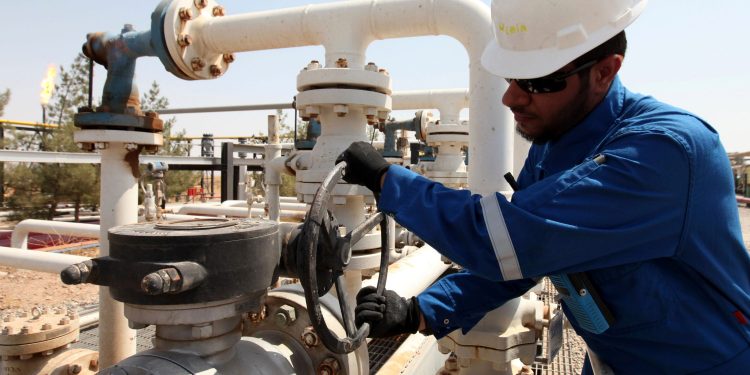 A worker adjusts a valve of an oil pipe.

Oil prices rose to near $110 a barrel on Friday, as Russia’s continued bombardment of major Ukrainian cities fueled concern that there may be further sanctions on its energy output and a lengthy disruption to supply.

Ukraine said a theater had been blown up in the city of Mariupol, the capital Kyiv came under renewed shelling, and 53 civilians had been killed in the northern city Chernihiv as the war entered its fourth week on Thursday.

Officials from both countries said they had met for negotiations, but their positions remain far apart, Reuters reported. The Kremlin said no agreement has been reached.

“With peace talks appearing to falter, and expectations increasing that the devastating war in Ukraine will become entrenched, the oil price has been on the march upwards again,” Susannah Streeter, senior markets analyst at Hargreaves Lansdown, said.

Despite Friday’s rally, oil is considerably below its 14-year highs of about $130 a barrel less than two weeks ago.

Prices have been highly sensitive to developments in Ukraine, adding to worries about the potential escalation of the geopolitical situation. While the US and UK have banned Russian oil, the European Union hasn’t yet announced an outright ban, because the region is highly reliant on energy imports.

UK finance minister Rishi Sunak has warned of a £70 billion ($91 billion) hit to the economy and a recession if Europe immediately bans Russian oil and gas.

Also contributing to price moves higher is the International Energy Agency this week predicting a sharp fall in Russian oil production. The agency expects production to fall by 3 million barrels per day from April, due to the sanctions and the voluntary “self-sanctioning” boycott by many buyers.

“This is the biggest upheaval for commodity markets since 1973,” said Goldman Sachs’ global head of commodities research Jeff Currie. A big difference between the oil crisis of ’73 and now is that this is a buyer boycott, not a seller boycott, he said.

Sanctions on Russian oil supply, months of on-and-off talks on the Iran deal, and worries about new COVID-19 lockdowns in China have all been driving factors of the oil market this week.

“No one development discretely drove oil prices, but the negative tone around the conflict as well as heightened volatility in commodity markets contributed,” Deutsche Bank strategists said.

Further, exchanges have reportedly increased margin requirements for commodities contracts, including oil futures. This led to further selling as more speculative players were forced to liquidate or scale back their positions, according to Kpler Research.

“Whilst taking some of the speculative heat out of the market is not necessarily a bad thing, the upshot is that the market may well not currently be correctly reflecting the real price risk, leading to the potential for further price spikes,” Kpler analysts wrote in a note.

Read more: Wladimir Klitschko is fighting on the front line to defend Ukraine. The head of the boxing legend’s $100 million family office breaks down his value investing philosophy – and why he focuses on disruptive tech and commodities in particular