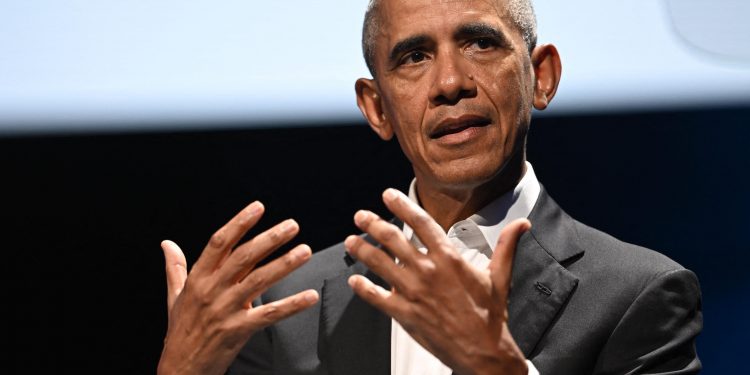 Former US President Barack Obama speaks during the Copenhagen Democracy Summit at The Royal Danish Playhouse (Skuespilhuset) in Copenhagen, on June 10. 2022.

Former US President Barack Obama on Friday cautioned that Russia’s ongoing war against Ukraine will not end anytime soon and warned it will have far-reaching consequences.

“Make no mistake, this war is far from over. The costs will continue to mount,” Obama said during a speech at the Copenhagen Democracy Summit on Friday, adding that the trajectory of the war remains unpredictable and urged the world to remain “strong, steadfast and sustained” in its support until the conflict ends.

Obama praised the fierce resistance of Ukrainian forces and civilians against the aggression of Russian troops, citing their “courage” as a reason that President Vladimir Putin has been unable to achieve his desired strategic objectives within the eastern European country.

“They’ve united to defend not just their sovereignty, but their democratic identity,” he said. “Their actions have rallied much of the world behind the values of self-determination and human dignity — it’s inspiring.”

The war, Obama said, has turned Russia into an international pariah — cutting the country off from resources and forcing its “best and brightest” to leave.

Obama’s warning, however, underscores the current status of the 15-week-long war, which has become a slow-moving, scorched-earth, and bloody campaign in Ukraine’s eastern Donbas region.

Ukraine said earlier this week that over 40,000 civilians have been killed or injured since the February 24 invasion — a figure much higher than the latest United Nations tally of roughly 9,500 casualties.

The UN, however, has warned in all its casualty reports that it “believes that the actual figures are considerably higher, as the receipt of information from some locations where intense hostilities have been going on has been delayed and many reports are still pending corroboration.”

Meanwhile, on the battlefield, officials have said both Ukraine and Russia are losing hundreds of troops each day.

The Ukraine war has also prompted the largest refugee crisis in Europe since World War II. Well over seven million people have fled across Ukraine’s border since the war began, according to the UN refugee agency, and there are close to five million Ukrainian refugees across Europe.

There are also concerns that the war will catalyze a global food crisis, given Ukraine is a major exporter of wheat, sunflower oil, and corn. Russia’s blockade on Ukraine’s Black Sea ports is threatening the food supplies of countries around the world, particularly in Africa and the Middle East.

The roots of the war in Ukraine can be traced back to 2014, when Obama was still in the White House. That year, Russia invaded Ukraine and annexed Crimea. The Kremlin in 2014 also began supporting rebels in a war against Ukrainian forces in the Donbas. By the time Putin ordered a full-scale invasion of Ukraine in late Feburary, roughly one-third of the Donbas was controlled by the Kremlin-backed rebels.

Russia’s aggression toward Ukraine in 2014 led to historic tensions between Moscow and Washington, which have been on the rise ever since.

The Obama administration slapped sanctions on Russia over the 2014 annexation of Crimea, but they didn’t go nearly as far as more recent economic penalties imposed on Russia by the Biden administration and European countries in response to the broader invasion of Ukraine this year.

Ukrainian President Volodymyr Zelenskyy has criticized the West over its response to the annexation of Crimea, suggesting it paved the way for the wider war.

“If the world had punished Russia for what it did in 2014, there would be none of the horrors of this invasion of Ukraine in 2022,” Zelenskyy said in late March. “We need to fix these terrible mistakes now.”