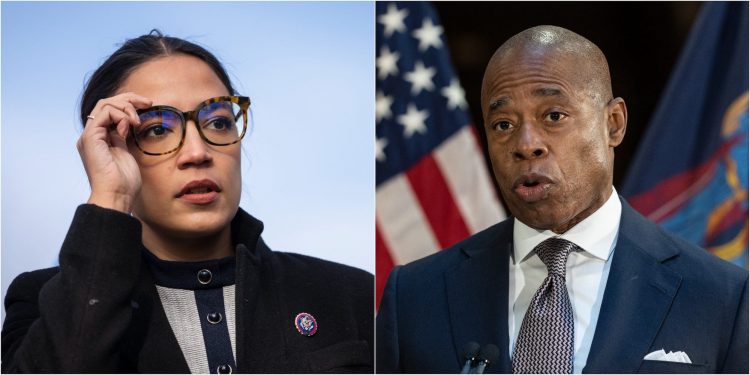 Just over a week since taking office, New York City Mayor Eric Adams escalated a back-and-forth with one of the city’s most prominent Democrats.

In an interview with The New York Times published Tuesday, Adams accused Rep. Alexandria Ocasio-Cortez of playing “word police” and that he “can only aspire one day to be as perfect” as she is.

It started with an Adams press conference last week where he implored white collar employers to send their workers back to the office and with more frequency.

“My low-skill workers, my cooks, my dishwashers, my messengers, my shoe shine people, those that work in Dunkin’ Donuts, they don’t have the academic skills to sit in the corner office,” Adams said. “They need this.”

Ocasio-Cortez, a Queens Democrat, responded by disputing Adams via Twitter.

“The suggestion that any job is ‘low skill’ is a myth perpetuated by wealthy interests to justify inhumane working conditions, little/no healthcare, and low wages,” AOC tweeted. “Plus being a waitress has made me and many others *better* at our jobs than those who’ve never known that life.”

The mayor made an addendum to his earlier comments a few hours after AOC tweeted her critique, qualifying what he said with his own experience in the food service sector.

“I was a cook. I was a dishwasher. If nobody came to my restaurant when I was in college, I wouldn’t have been able to survive,” Adams tweeted. “When you talk about closing down our city, you’re talking about putting low-wage workers out of a job. I’m not letting that happen.”

Adams earlier referred to the congresswoman as “words police” in a CNBC interview last Thursday, but went into more detail during his Times interview.

“I would rather be authentic and make errors than be robotic and not be sincere in what they’re doing,” he said.

“I know they’re perfect, and there’s not much I can do about that,” he added, referring to AOC. “I can only aspire one day to be as perfect as they are.”

The new mayor did leave the door open to collaboration with the high profile lawmaker down the line, but not before letting in one final dig.

“I can sit there and work with any group,” Adams told The Timees. “But you don’t work with a group by just tweeting. “