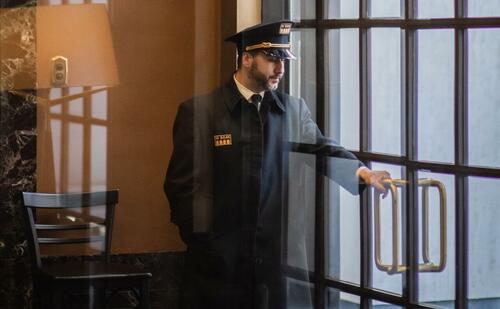 The labor-organizing bug has clearly caught on in NYC – from the Amazon warehouse employees who package and ship products to the doormen who receive the packages on the other end of the “last mile” and deliver them to their well-heeled residents.

One week after workers at an Amazon facility on Staten Island succeeded in their vote to unionize (a vote that the company is now trying to contest), a group of doormen for Manhattan’s elite buildings are driving a hard bargain, and threatening to go on strike if their demands aren’t met, in their latest round of contract negotiations, according to a report from WSJ.

The union plans to hold a vote on whether to strike on Wednesday.

An estimated 32,000 doormen, superintendents, maintenance workers and other residential-building staff could go on strike if an agreement isn’t reached before their contract expires April 20, according to their SEIU-32BJ union.

If the parties fail to reach a suitable agreement and the strike commences, it will be the union’s first strike since 1991, when work was stopped for 12 days.

Per WSJ, the biggest sticking point in negotiations comes down to health benefits. Under the current contract, workers don’t pay anything for family health-insurance premiums, but building owners are demanding that they should start shouldering part of the (rapidly-growing) cost of their health plans. However, a specific amount hasn’t been proposed.

Management says that the average worker pays a portion of their health-care costs, and that their workers should also pay their “fair share”.

“The average employee in the United States makes a contribution for family health coverage,” said Howard Rothschild, president of the Realty Advisory Board on Labor Relations, which represents building owners and agents. “We believe, in terms of this, our group of employees should pay their fair share.”

But union president Kyle Bragg says the workers – who earn an average of $55K a year – are being squeezed by rising costs and “…we won’t hesitate if we believe that we are being treated unfairly.”

Unsurprisingly, the WSJ managed to find some champagne socialists who live in the luxury high-rises to go on the record in support of the union’s efforts.

Aaron Craig, who lives in a luxury high-rise in the financial district, said he supports the workers even though his building’s management warned that residents would have to take out their own trash and retrieve food deliveries if doormen and other staff go on strike.

“I think it’s pretty clear that the union is in the right, so I hope they succeed,” said Mr. Craig, 33 years old, who works as a data scientist for a social-media company.

The paper also noted that the doormen were deemed “essential” workers and had to show up to work every day during the pandemic, while their well-heeled residents were able to flee to the suburbs.