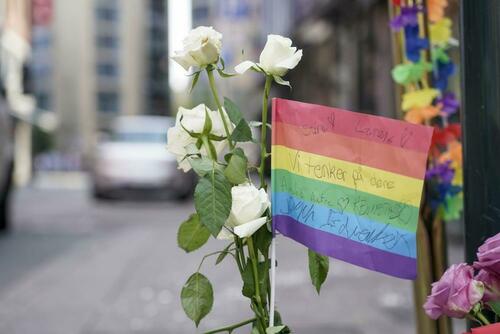 Norway raised its terror alert to the highest level of “extraordinary” Saturday after a gunman in Oslo opened fire in a bar district popular with the LGBTQ community, killing two and leaving more than 20 wounded, AP reports.

Flowers are left at the scene of a shooting in central Oslo, Saturday, June 25, 2022. (photo: Terje Pederson via AP)

According to Norwegian security service PST chief Roger Berg, the series of shootings were an “extreme Islamist terror act,” adding that the gunman, a Norwegian citizen of Iranian origin, was previously known to police and had a “long history of violence and threats.”

Norwegian public broadcaster NRK’s Olav Roenneberg witnessed the shooting and said, “the man arrived at the site with a bag. He picked up a weapon and started shooting … First I thought it was an air gun. Then the glass of the bar next door was shattered and I understood I had to run for cover.”

Another witness told Norwegian broadcaster TV2 that someone was shooting with a “submachine gun.” Of note, fully automatic weapons are illegal in Norway unless they fall into the collector category.

Suspect in Oslo shooting is 42 year-old man with a long criminal record and possibly a history of mental illness. He is of Iranian Kurdish origin and came to Norway as refugee at age 12 https://t.co/PkfBF4DVlH

The 42yo gunman was arrested shortly after he opened fire at three locations in downtown Oslo during the annual Pride festival, and was found to have an automatic weapon and a pistol.

One of the shootings happened outside the “London Pub,” a popular gay bar.

#Update: Just in – Other video footage of after the scene in #Oslo in #Norway, after a mass shooting event near the “London” gay night club, resulting in at least 2 people dead and at least 22 others injured whom 10 are being treated in the hospital with 2 gunshot wounds. pic.twitter.com/XLXWKqNJCJ

The annual #Pride parade in #Oslo has been canceled after a deadly shooting at a #gay venue that Norwegian police are investigating as a possible terrorist attack. 2 people were killed and 8 others are injured. The suspect, an #Iranian-born #Norwegian, has been apprehended. pic.twitter.com/o05jpSZRZd

The shootings occurred around 0100 local time and sent partygoers panicking according to unconfirmed footage.

#Oslo
Hours after a shooting early Saturday in #Norway’s capital that killed two people and seriously wounded at least 10, the police said they were treating it as a terrorist attack. pic.twitter.com/gxOHFHHjO7

After the attack, Norway raised its terror alert level from “moderate” to “extraordinary” — the highest level. Police advised Pride organizers to cancel a parade on Saturday afternoon.

“Oslo Pride therefore urges everyone who planned to participate or watch the parade to not show up. All events in connection with Oslo Prides are canceled,” Pride organizers said on the festival’s official Facebook page.

Hatlo said the suspect is being held on suspicion of murder, attempted murder, and terrorism.

“Our overall assessment is that there are grounds to believe that he [the gunman] wanted to cause grave fear in the population,” he said.

Spontaneous pride parade in Oslo after the official parade was cancelled.
❤️🧡💛💚💙💜 pic.twitter.com/lRFvdDliCC

The official Pride parade in Oslo was canseld due to the shooting towards a gay bar last night.
THIS is Oslo now spontaneous parade. Love wil always win. pic.twitter.com/dLiw61rH6R