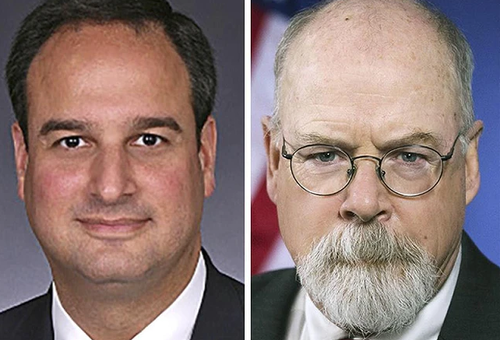 Authored by Techno Fog via The Reactionary,

Today, there was a hearing in the U.S. District Court for the District of Columbia in the matter of the United States v. Michael Sussmann, the former DNC/Clinton/Perkins Coie lawyer accused of providing false statements relating to the Alfa Bank/Trump Organization hoax to then-FBI general counsel James Baker in the fall of 2016. Here is more background on his indictment and how Sussmann and his allies passed Trump transition data to the CIA.

About the hearing – we have the transcript (link at the bottom). The hearing related to Sussmann’s efforts to dismiss the indictment, with the defense alleging that Sussmann’s alleged lies were not material.

The Court looked on that argument with skepticism. And rightly so, as the issue of materiality is typically a question for the jury. Sussmann’s lawyers did him no favors by admitting it was a “closer call” on whether the government’s arguments of materiality should be presented to the jury.

The Special Counsel’s argument on materiality was more more effective, explaining what Sussmann did and why his lies mattered:

Interestingly, the Court also asked if the underlying information – the Alfa Bank/Trump Organization data that Sussmann provided the FBI – was “false”. On that question the Special Counsel declined to show their hand.

Why does this matter? Because it has been long-suspected that the the Alfa/Trump data was manipulated, if not outright invented. Recall this discussion in the Sussmann indictment, where the researchers discussed the inability “to defend against the criticism that this is not spoofed traffic”:

Now we get to the juicy parts of the hearing. The Special Counsel is in possession of a number of documents from the Clinton Campaign, Rodney Joffe (more about him here), and Hillary for America. And there is a fight over whether some of those documents are privileged.

The Special Counsel provided one example, stating that the Clinton Campaign is putting out bogus claims of privilege over the communications of Rodney Joffe. These are likely to fail. The Clinton Campaign was not copied on the e-mails, there might very well be a crime-fraud exception to any assertion of privilege, and because Joffe wasn’t providing legal advice to Hillary.

Fusion GPS is making similar claims of privilege to keep their documents secret.

They’ve tried these types of abuses of “privilege” in a civil case, and we previously discussed why those efforts were bound to fail, perhaps most notably because Fusion GPS has admitted they were doing political work not subject to privilege. Fusion GPS cannot now claim they were performing legal or litigation-focused work.

Moreover, even if this were legal work, Fusion GPS waived privilege when leaking their research to the media, government officials, and other third parties. Oops.