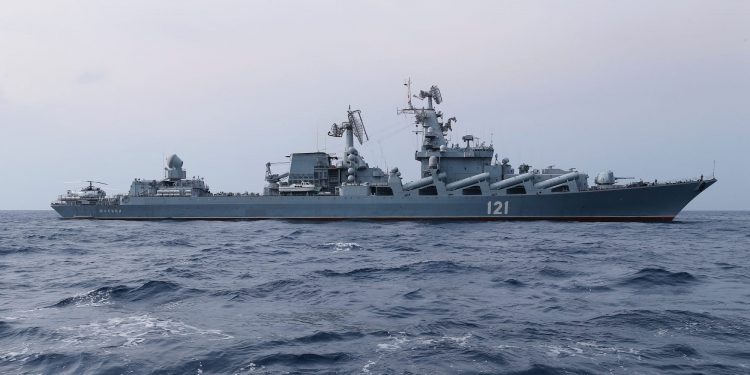 The Russian missile cruiser Moskva sank on April 14 from damages after it was struck by Ukrainian missiles.

The mother of a Russian sailor who has been missing since Ukraine sunk Russia’s Moskva missile cruiser ship in April said that her opinion of her government has drastically changed – but that she is worried about speaking out in her own country, according to The Guardian.

The Ukrainians attacked the warship — loaded with military supplies and artillery — on April 14, striking and sinking the Moskva with anti-ship missiles. It’s still unclear how many casualties in total resulted from the attack.

“I look at my government totally different since the war started,” Tatyana Efremenko told The Guardian. Her son, Nikita, was a conscript on the ship, and she has not heard from him since the attack.

“There are some very harsh things I would like to say about our leadership, but maybe best if I don’t because they would put me in prison for it,” she added.

At the outset of the war, Putin introduced and the Duma passed a draconian media censorship law that allows the government to jail journalists who report what the Kremlin deems to be “fake” news about the military. Reporters and private citizens can be sentenced to up to 15 years in prison, and cannot use the word “war” publicly to describe the war in Ukraine.

After the Moskva attack, Moscow had claimed that the ship sank due to a fire on board.

According to US officials who spoke with NBC News on the condition of anonymity, Ukrainian forces had asked their American counterparts for information about a ship south of Odesa, in the Black Sea. The US shared with Ukraine that the ship was indeed the Moskva and helped secure its exact location, according to the report.

Officials who spoke with NBC News told the outlet that the US was not aware that Ukrainian officials would strike the ship.