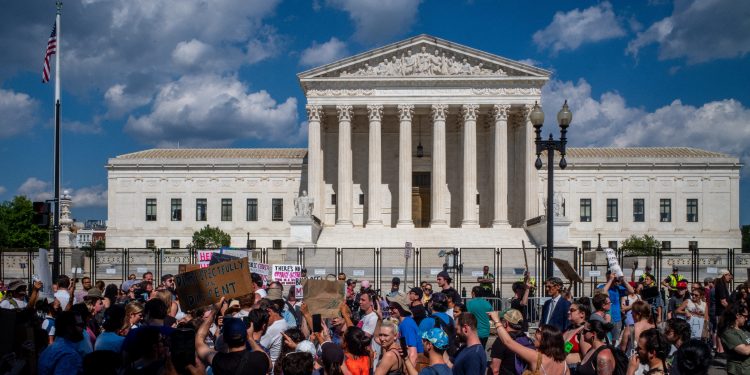 Protests in front of the Supreme Court building following the announcement to the Dobbs v Jackson Women’s Health Organization ruling on June 25, 2022.

Most Americans have an unfavorable view of the Supreme Court’s consequential decision to overturn Roe v. Wade, the 1973 landmark ruling that established the constitutional right to abortion, a new poll conducted by Pew Research Center found.

Roughly six-in-ten American adults disapproved of the ruling, with 43% saying they strongly disapproved, according to the poll released on Wednesday. The sentiment was largely split along political party lines, as most Democrats polled disapproved of the decision and most Republicans approved of it.

The court’s decision throws out federal abortion rights of nearly 50 years and gives states the power to decide their own abortion laws. Several Republican-led states across the country have banned the procedure in the wake of the ruling, with more restrictions expected to come.

The topic of abortion has long divided the nation, but public opinion polling has shown that a majority of Americans support its legalization. Since the June 24 decision came down, that stance has remained unchanged, with 62% of the public saying abortion should be legal in all or most cases, according to the Pew Research Center.

Public approval of the Supreme Court has waned in the past year. Only 25% of Americans expressed confidence in the nation’s highest court, according to a Gallup poll released a day before the ruling.

The Pew Research Center survey was conducted between June 27 and July 4 to a nationally representative sample of 6,174 adults. The margin of error was ±1.8 percentage points.