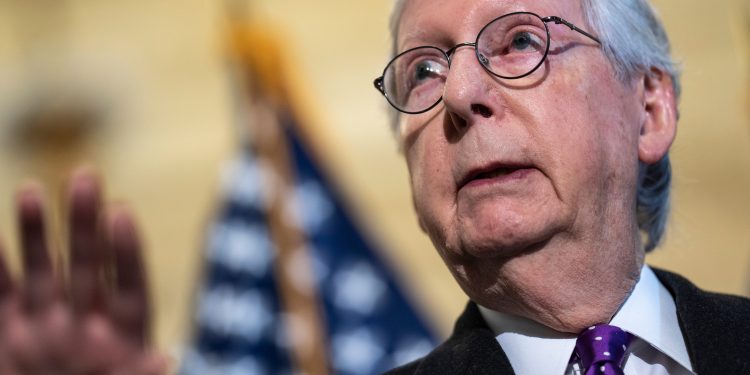 Senate Minority Leader Mitch McConnell predicted on Tuesday that several Republicans will be running for the White House in 2024, even as former President Donald Trump has all but made it official that he’ll be in the presidential contest.

“I think we’re going to have a crowded field for president,” McConnell said, speaking at the GOP’s regular press conference after a caucus lunch on Capitol Hill. “I assume that most of that will unfold later. And people will be picking their candidates during a crowded primary field.”

McConnell’s response was to a reporter who asked how he’d handle Trump running for president in 2024. In February 2021, McConnell said he’d “absolutely” support Trump if he were the 2024 nominee. He added, however, that he expected several GOP senators and governors to also be in the running and predicted a “wide-open” GOP race.

A growing number of Republican presidential hopefuls appear to be testing the field with donor meetings and trips to early voting states. While polling shows that Trump is still the preferred presidential candidate among GOP voters, most potential candidates have not said they’d bow out of the race if Trump enters the GOP primary.

Various candidates also appear to be warming up to the idea of challenging Trump or not letting his plans get in the way of their own ambitions.

Insider previously reported that Trump, 76, had backed away from announcing a presidential run as early as July, and The Washington Post reported that the announcement could come as soon as September.

Congressional Republicans and candidates for office have said they would prefer that Trump delay an announcement until 2023 so they can focus their campaign messaging on issues that polls show are at the top of voters’ priorities, from high gas prices to inflation. Political strategists worry that candidates will otherwise have to field questions about Trump and his efforts to overturn the election on January 6, 2021.

Even so, a long list of Republicans appear to already be evaluating their 2024 prospects.

Trump could delay a formal announcement until the middle or even end of 2023 and still have plenty of time to qualify for primary ballots and run a nationwide campaign.

President Joe Biden, 79, has said he plans to run for a second term but some Democrats are skeptical given his age and low approval ratings.

It’s possible, if Biden reverses course, that a Democratic primary could be wide open. Some Democrats are gaining prominent media attention through wading into national debates, gaining allies through campaign donations, and appearing at events in potential early voting states.