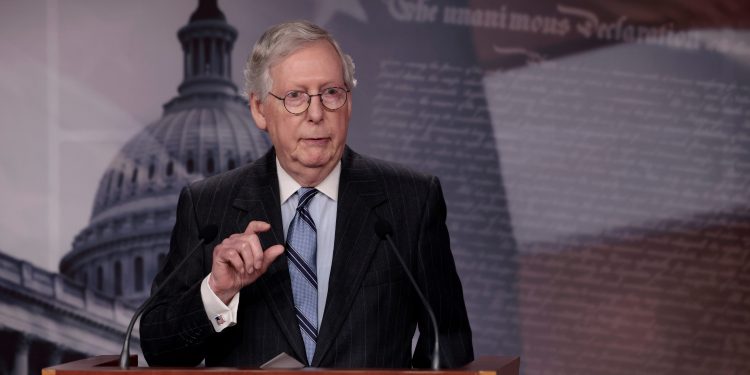 “I think Sen. Rounds told the truth about what happened in the 2020 election,” McConnell told CNN. “And I agree with him.”

McConnell’s support comes after Rounds earlier this week rejected Trump’s debunked claims that Democrats “rigged” the 2020 presidential election and that he would have won reelection if not for widespread voter fraud.

“The election was fair — as fair as we’ve seen,” Rounds, a South Dakota Republican, said Sunday in an ABC News interview. “We simply did not win the election as Republicans for the presidency.”

Trump seized on the comments and issued a sharp rebuke to the senator the next day, saying he “just went woke on the Fraudulent Presidential Election of 2020.”

“Is he crazy or just stupid?” Trump went on, adding that he will never endorse Rounds again. Rounds handily won reelection in his deep red state in 2020.

“The only reason he did this is because he got my endorsement and easily won his state in 2020, so now he thinks he has time, and those are the only ones, the weak, who will break away. Even though his election will not be coming up for 5 years, I will never endorse this jerk again,” Trump said.

Rounds later doubled down on his earlier statements about the 2020 election in response to Trump’s criticism.

“I stand by my statement. The former president lost the 2020 election,” he said.

McConnell has tried to shift the GOP’s focus away from the 2020 presidential election, clashing with Trump’s continued fixation on it. McConnell has signaled that his priorities are opposing the Biden administration’s agenda and preparing for the 2022 midterm elections as Republicans vie to retake the House and Senate majorities.

Rounds expressed a similar sentiment on Sunday, making a call to focus on future elections rather than past.

“Moving forward, we have to refocus once again on what it’s going to take to win the presidency,” Rounds told ABC News. “And if we simply look back and tell our people don’t vote because there’s cheating going on, then we’re going to put ourselves in a huge disadvantage.”