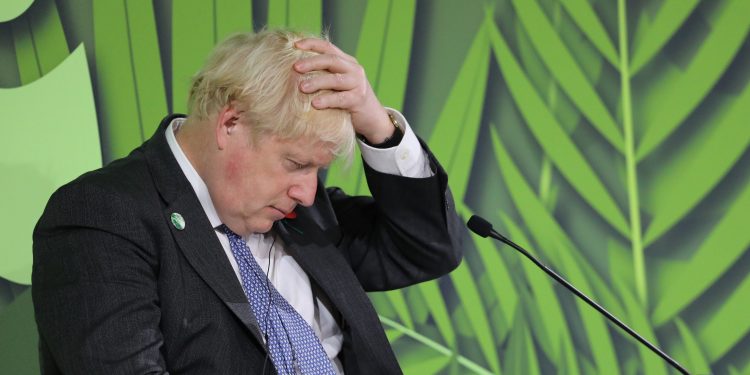 A minister insisted it would “be making a leap” to assume that Boris Johnson was aware of the lockdown-breaching party last May, after a leaked email revealed one of his closest aides had invited more than 100 colleagues to a “bring your own bottle” party in the Downing Street garden.

“After what has been an incredibly busy period, it would be nice to make the most of the lovely weather and have some socially distanced drinks in the No10 garden this evening,” Johnson’s Principal Private Secretary Martin Reynolds said in an email to over a hundred staffers at Johnson’s 10 Downing Street office.

“Please join us from 6 p.m. and bring your own booze!” Reynolds wrote in the email obtained by British broadcaster ITV News, which was sent on May 20, 2020.

Edward Argar, the Minister of State for Health at the Department of Health and Social Care, told Sky News it was “absolutely right” that the allegations be investigated by Sue Gray, one of Whitehall’s most senior officials, who was already probing claims about multiple parties during Christmas 2020.

But he added he would not “prejudge” her outcome, saying it would not be “appropriate” to comment before Gray  reached a conclusion. Argar said the rules at the time were clear, with a press conference on the day of the party being used to tell the public they could only meet one person from outside their household.

No timeline has been set for the inquiry, but the prime minister has requested it be “swift,” the minister said.

Asked about whether Johnson knew about the party, he replied: “I have seen the email, I don’t know the context of that email… You are making a leap there in assumption about the prime minister.”

“I am not going to be drawn there,” he added.

Dominic Cummings, Johnson’s former chief of staff, claims the prime minister was there.

Around 40 staffers gathered for food and drinks in the garden that day. Witnesses claim Johnson and his wife, Carrie, were among them, according to the report.

Hannah White, a former official who ran the Committee on Standards in Public Life in the Cabinet Office, told BBC Radio 4’s Today program it was “extremely unlikely” that Reynolds would have sent around the email invite “without the assent of the prime minister”.

She noted that witnesses were now “saying he was there.”

However Dr. White, now the deputy director of the Institute for Government, said Labour’s claims that he had misled Parliament were “technically” incorrect as he had been asked “very specifically about Christmas parties.”

At the time, Johnson had denied knowledge of the now-infamous cheese and wine party, saying he was “sickened in myself and furious” after a video emerged of his advisers laughing about the rule-breaking bash.

The Metropolitan Police, who thus far have said there is insufficient evidence to investigate multiple allegations of lockdown-breaching parties, is now looking into the matter.

A spokesperson said: “The Metropolitan Police Service is aware of widespread reporting relating to alleged breaches of the Health Protection Regulations at Downing Street on 20 May 2020 and is in contact with the Cabinet Office.