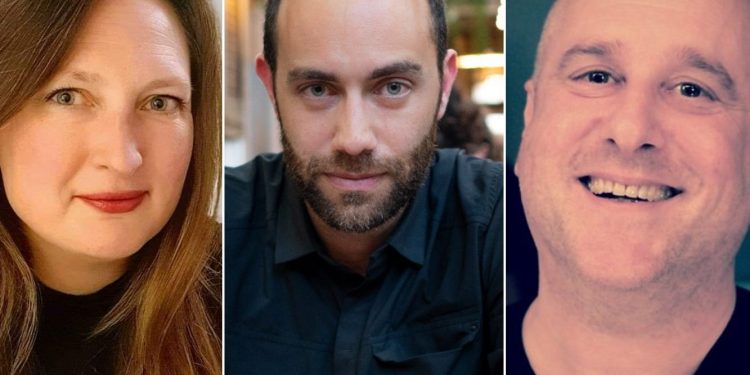 From left to right: Kathrine Richter, ‘Nan,’ and Bruce Lawson.

Bruce Lawson from Birmingham, England, has sent approximately 100 texts to strangers in Russia about the true extent of the war in Ukraine during the past week, he told Insider.

He said that the software engineer has been copying chunks of prewritten Russian-language text provided by the Polish hacktivist group Squad303 and sending SMS messages to randomly selected numbers between business meetings.

Lawson has been using 1920.in, an online tool designed to cut through Russian President Vladimir Putin’s censorship, which The Wall Street Journal notes use a bank of nearly 140 million Russian email addresses and 20 million cell phone numbers.

Users can send texts, WhatsApp messages, or emails from anywhere in the world to inform Russians that soldiers and civilians are being killed in the deadly invasion of Ukraine that the Kremlin is trying to characterize as a “special military operation.”

According to Squad303, who are connected to the Anonymous hacking collective, some 30 million messages have been sent to random Russians since the website was launched on March 6, Insider’s Kieran Press-Reynolds reported.

Lawson started using the online tool last week, hoping that he might “change somebody’s mind” and encourage a stranger to see beyond the lies that the Russian propaganda machine is pumping out.

So far, he’s received a mixed response. “I’ve had a fair few, ‘Fuck off, motherfucker,’ messages,” Lawson said. “But I’ve also had quite a few nice conversations with people who are saying, ‘We don’t want this either, and we’re scared.'”

That’s more than can be said for Nan, who asked to only be referred to by his first name due to the fear of being trolled. So far, the marketing executive from San Antonio, Texas, hasn’t received a single response to any of his WhatsApp messages.

“Nobody wrote me back,” he told Insider. “I’d say that about from the 14 people that I sent messages to, about 10 of them showed the double checkmark with the blue, which means they read it.”

Nonetheless, Nan said he plans on continuing to send messages because he wants Russians to “really reconsider what they’re hearing” about Ukraine from state media outlets.

A combination of censorship and propaganda is so effective the Ukrainians are struggling to persuade their relatives in Russia that their country is under attack, Insider’s Mia Jankowicz reported.

Alexander Nielsen, a military analyst from Copenhagen, Denmark, was initially frustrated by the lack of responses to the deluge of texts he and his girlfriend had been sending. At first, he told Insider, he felt like he was sending messages “out into the void.”

That was until he received a call from a number he had texted. Unable to speak Russian, Nielsen couldn’t hold a conversation with the stranger, but, he said, it felt “empowering” to get a reply.

It made it clear that he spoke to “real people,” he said. “It felt good to actually do something and be on the digital frontline,” Nielsen added.

Energized by that call, Nielsen recruited his friend Kathrine Richter to join the international army of online volunteers sending messages via 1920.in.

Richter, who is Denmark’s country-lead for the European political movement Volt Europa, told Insider that she has sent a handful of messages via the online tool and intends to continue doing so.

“Putin’s Russia is being dislocated from the rest of the world, divorced from democracy, so we need more than ever to penetrate that and make some connections at a personal level with direct contact,” Richter explained.

She said that sending these formulated texts to strangers might feel inconsequential but, Richter added, it still serves to make a difference.

“I think when we look at what’s happening in Ukraine, we can’t be complacent anymore,” Richter continued. “We have to do everything we can, even if it’s just a small thing.”