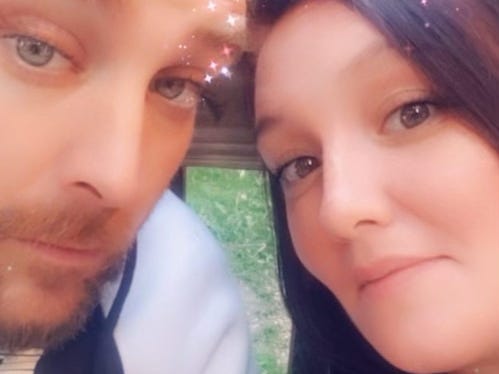 Malissa Villegas and her fiance, Jason McCallister, have been partially supporting their family with funds from their city’s guaranteed income program.

Malissa Villegas and her fiance Jason McCallister take on part-time jobs whenever they can. But between their disabilities and hesitance about workplace exposure to COVID, they’ve been homebound with their two children for most of the past two years.

Villegas’ eight-year-old daughter, Samantha, hasn’t physically been in a classroom since March 2020, and is instead enrolled in online learning from home. In addition, Villegas cares for her two-year-old son, Mason. As many parents will understand, caretaking for Villegas is a full-time job — but not one that comes with a paycheck.

The possibilities opened up for their family when Villegas was chosen for a guaranteed-income pilot program in her hometown of St. Paul, Minnesota. A guaranteed income is a cash payment, with no strings attached, for eligible recipients.

Programs like these have surged in popularity throughout the country over the last year with at least 33 implemented in cities and states nationwide, as reported by Insider. California’s basic income program prioritizes cash for foster youth aging out of the system and pregnant people. Jackson, Mississippi, gives funds to 20 low-income Black mothers living in subsidized housing. The common thread: no-strings-attached cash to help people facing financial straits.

With their $500 per month, Villegas and McCallister have been able to pay for medical treatments for their children, car payments, and diapers — essentially filling in gaps that the pandemic has made it harder for their family to cover.

“It helped me with the kids’ stuff, like clothes, diapers, and Christmas gifts,” Villegas said, listing “building blocks, books, and baby stuff” as well as baby lotion, night cream, and bath soap to deal with Mason’s eczema.

“When you have a crying kid, that stuff’s essential,” she said.

St. Paul mayor Melvin Carter is on the board of Mayors for a Guaranteed Income, a coalition of more than 60 mayors working to launch these programs across the country. Carter launched People’s Prosperity Pilot (PPP) in November 2020 to help 150 families who fall below the federal poverty level and saw their work hours reduced because of COVID-19 with $500 a month for 18 months.

“A guaranteed income helps families in ways that traditional forms of public benefits don’t, by allowing families to spend the money however they see fit,” Peter Leggett, the Mayor Carter’s communications director, told Insider. “This allows families the flexibility and autonomy to take care of their needs as they come up.”

Childcare, in particular, was a big challenge, Leggett added, with 63% of participants in St. Paul’s program financially impacted from lack of care options due to COVID-19.

Villegas first heard about PPP from a hospital employee when she gave birth to Mason in 2020. By that point, she’d stopped working full-time for four years, due to mental health disabilities. Part-time jobs affect her Supplemental Security Income (SSI), so she usually avoids them. Money from guaranteed income programs does not typically impact one’s eligibility for public assistance programs in the way employment can.

The couple has been supporting their family on about $2,000 per month in disability income because of mental health issues and complications from a childhood case of spinal meningitis. After spending money on rent, utilities, and groceries, they say there’s not typically a lot leftover for other household costs. Villegas told Insider that the $500 per month from PPP has been helpful to her family during the pandemic, which they’ve spent on car payments and supplies for their children.

It also helped her pay to fix her car so they could visit family for the holidays, take kids to the doctor, and drive to the grocery store, which is “only ten minutes by car, but about 40 by transit.”

McCallister has been a beneficiary of a disability program known as Social Security Disability Insurance (SSDI) since 2003. He was diagnosed with spinal meningitis as a child, and still suffers from health complications as an adult. He’d always worked part-time jobs while receiving SSDI funds, even taking on work during the pandemic.

McCallister told Insider that it was difficult to hold on to a job, taking care of Villegas and their children. Like other people who had spinal meningitis, McCallister has a weakened immune system, making a pandemic workplace environment a fraught one for him. For a while, he would work stints at restaurants or a metal fabrication plant. That became untenable a few months ago because the kids were getting sick, including an upper-respiratory infection, he said. Plus, the entire family got COVID.

“I’d try to put my health aside for my family and go make money anyway,” he said, but “the money from [PPP] actually helps out a lot when I have to take off time from work.”