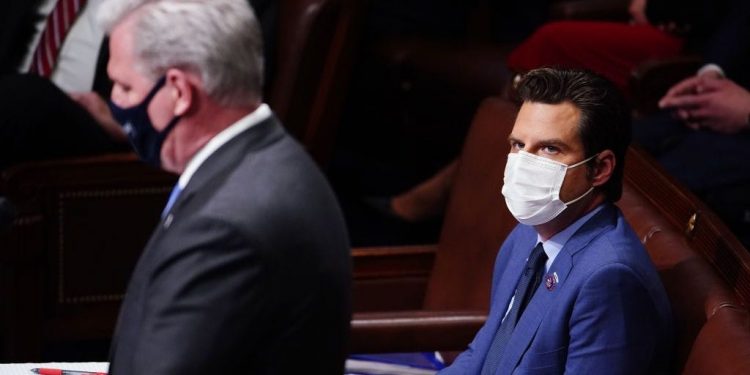 “It is a covenant based on money,” Gaetz, a Republican from Florida, told Time Magazine’s Molly Ball. “Kevin McCarthy is the most elite fundraiser in the history of the Republican caucus. He is the LeBron James of lobbyist and PAC fundraising. And that is his covenant with the conference.”

Besides, Gaetz added, it’s not like the House GOP’s past leaders were honest brokers.

Gaetz’s comments come in the wake of leaked audio tapes in which McCarthy privately told top House Republicans that he would ask Trump to resign and questioned whether Gaetz and Rep. Marjorie Taylor Greene should be kicked off Twitter. At the time the audio was published, Gaetz slammed McCarthy’s comments.

If as the current political environment suggests, and Republicans retake control of the House after November’s midterm elections, McCarthy would be in line to becoming speaker.

He would need 218 votes to claim the speaker’s gavel, meaning that the number of seats House Republicans flip this fall will be of paramount importance to whether he would need the support of Gaetz and other so-called “MAGA” lawmakers.

McCarthy seemed to be a shoo-in to replace Boehner in 2015, but withdrew from the race amid rumors of an affair and the fallout from his comments about the GOP’s Benghazi investigation.

McCarthy’s own campaign operation hauled in a record-breaking $31.5 million during the first quarter of this year — much of that money was or will be transferred to House Republicans’ campaign arm and individual lawmakers facing tough campaigns. His allies also operate a super PAC that has already placed $125 million worth of ad reservations across the country.

A spokesperson for McCarthy did not immediately respond to Insider’s request for comment.

In the same Time interview, Gaetz suggested that Ohio Republican Jim Jordan would be the ideal speaker. But Jordan, once a thorn in McCarthy’s side, has ruled out a campaign and has become a close ally of the top House Republican.

Gaetz continues to face the fallout of a federal sex trafficking investigation. The Florida Republican has repeatedly denied any wrongdoing.