Marsquakes reveal the anatomy of the Red Planet’s interior 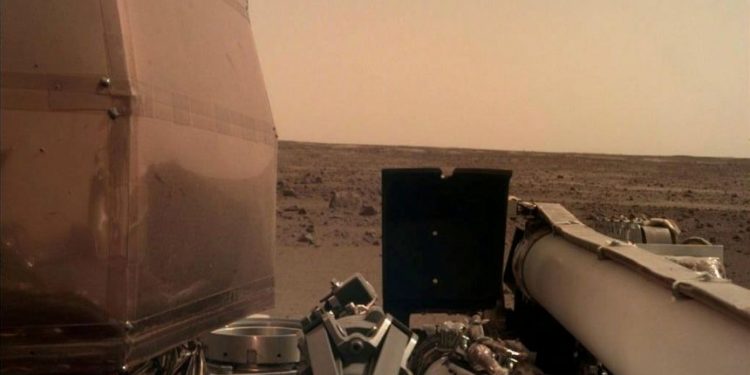 The Instrument Deployment Camera (IDC), located on the robotic arm of NASA’s InSight lander, took this image of the Martian surface the day the spacecraft touched down on the Red Planet, and was relayed from InSight to Earth via NASA’s Odyssey spacecraft, currently orbiting Mars, on November 26, 2018. Picture taken November 26, 2018. (NASA / File Photo)

WASHINGTON – Seismic waves from quakes detected by NASA’s robotic InSight lander have helped scientists decipher the anatomy of Mars, including the first estimates of the size of its large liquid metal core, thickness of its crust, and nature of its mantle.

The findings disclosed on Thursday shed light on what had been a poorly understood internal structure of Earth’s smaller neighbor and provided a few surprises as well as confirmation that the Red Planet’s center is molten.

The InSight lander, which touched down in 2018 to begin the first mission to study the deep interior of Mars, has detected  more than 700 marsquakes, most of modest strength.

Waves generated by quakes vary in speed and shape when journeying through different material inside a planet. Data from InSight’s seismometer instrument covering about three dozen marsquakes enabled the contours of the planet’s interior to come into focus.
TECHNOLOGY

“The real importance of these findings is that, for the first time, we actually have measurements of dimensions – sizes – of the fundamental building blocks of the planet Mars,” said planetary geophysicist Bruce Banerdt of NASA’s Jet Propulsion Laboratory, the InSight mission’s principal investigator.

“Before this, all we had were comparisons with Earth, theoretical calculations and indirect inferences from other observations like the trace isotope chemistry of Martian meteorites,” Banerdt added.