Mars rover rumbles by crashed artifacts in the Martian desert 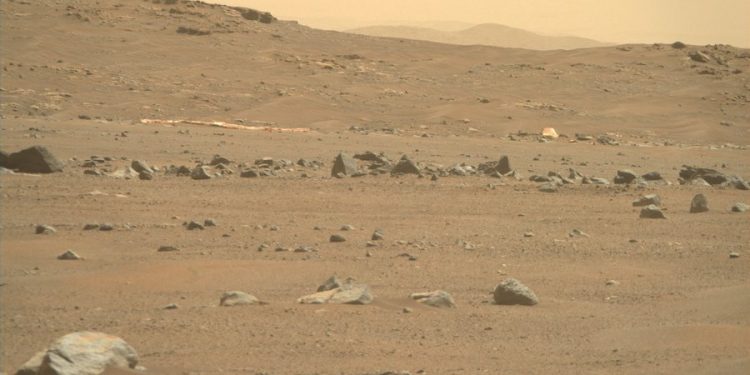 NASA’s Perseverance rover is on a mission to sleuth out past evidence of life on Mars. Along the way, it found evidence of Earthlings.

This week, the space agency posted an image of two objects the rover passed while traversing the Martian desert: a discarded parachute and a metal capsule. Both played vital roles in helping the car-sized exploration rover land safely on Mars.

You can spot the objects in the middle of the image. On left is the collapsed orange and white parachute; on right is a conspicuous part of the shell that housed the rover as it plunged through Mars’ atmosphere in February 2021.

Landing the 2,260-pound, $2.7 billion rover on Mars was an impressive feat, dubbed the “seven minutes of terror.” The plummeting spacecraft, traveling at some 1,000 mph, deployed a supersonic parachute to slow down. It ditched its heavy heat shield. Before choosing a safe landing spot (free of boulders, pits, or dangerous rocks), it abandoned the parachute; then a rocket-powered apparatus fired up and hovered in the air while carefully lowering the rover down to the ground. Everything must work swimmingly — and it did.

The rover is now on its way to a dried-up delta in Mars’ Jezero Crater, a place planetary scientists believe once hosted a lake.

“This delta is one of the best locations on Mars for the rover to look for signs of past microscopic life,” NASA said.