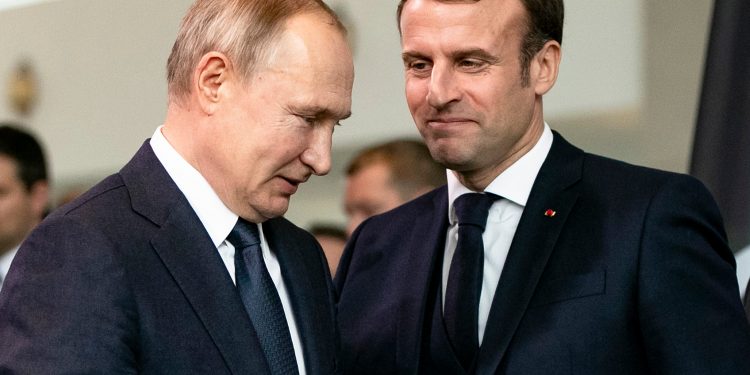 Emmanuel Macron (right) and Vladimir Putin in Berlin in January 2020.

“We must not humiliate Russia so that the day when the fighting stops we can build an exit ramp through diplomatic means,” he said in an interview with French media published on Saturday.

“I am convinced that it is France’s role to be a mediating power,” he said, per Reuters.

Although the French leader said in the interview that he is seeking a diplomatic solution, he said Putin is making a “historic” mistake by continuing to wage war in Ukraine.

“I think, and I told [Putin], that he is making a historic and fundamental mistake for his people, for himself, and for history,” Macron said, according to Deutsche Welle.  The Russian leader has “isolated himself” on the world stage, he added.

Macron has previously urged Western nations not to humiliate Putin, telling reporters in Strasbourg on May 9 that peace would come with “Ukraine and Russia around the table” and not with “humiliation.”

Ukrainian President Volodymyr Zelenskyy responded to the comment at the time, telling Italy’s RAI that Macron was looking “in vain” for a “way out of Russia.”

Putin responded by telling them that increasing arms supplies to Ukraine risks destabilizing the situation further, according to France 24.

France has already sent Caesar howitzers, MILAN anti-tank guided missiles, and Mistral anti-aircraft missiles to Ukraine. In May, Macron told Zelenskyy that arms deliveries to the war-torn country would intensify.