Macron Mulls Moscow Trip To Meet With Putin, Under “Preconditions” 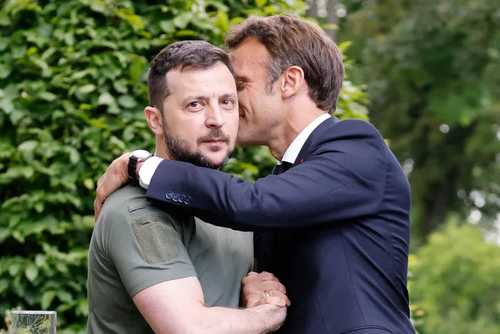 Macron Mulls Moscow Trip To Meet With Putin, Under “Preconditions”

French President Emmanuel Macron has indicated he’s mulling a trip to Moscow to meet in person with Russian President Vladimir Putin, but only if certain “preconditions” are in place first. He made the surprise statements while visiting Kiev on Thursday alongside German Chancellor Olaf Scholz and Italian Prime Minister Mario Draghi.

“I think that a trip to Russia today requires preconditions, that means gestures from President Putin. I will not go there just like that,” Macron said in remarks given to French broadcaster TF1. But he strongly suggested he’s ready to go based on certain “gestures” from Moscow.

Ukrainian President Zelensky looks straight at the camera as he is awkwardly hugged by French President Emmanuel Macron on Thursday. Image: AFP via Getty Images

He stressed that he “thinks it is France’s role” to continue directly engaging Kremlin leadership even if much of the rest of the West fails to. Macron has faced mounting criticism over what are now near weekly phone calls with Putin, in an effort to find a diplomatic solution to the war.

Macron had last met with Putin just weeks prior to the Feb.24 Russian invasion of Ukraine, on Feb.8. The French leader has also come under fire from allies and Western media over recent comments made saying the West must “not humiliate Russia” in enacting hardline measures leading to potential unnecessary escalation on both the economic front and the battlefield.

But Ukraine’s government has reacted coldly to the prospect of a Macron trip to meet with Putin:

In turn, Ukraine’s President Volodymyr Zelenskyy questioned if Putin was “ready to hear anything” and if talks with any world leader would change his mind.

The Kremlin has lately suggested that the hardline ‘no compromise’ stance of the US and UK in particular helped collapse talks between Ukrainian and Russian delegations in April.

It’s believed that during UK Prime Minister Boris Johnson’s second ‘surprise’ trip to Kiev on Friday, the British leader continued encouraging Zelensky on the same ‘no compromise’ path – that is, to avoid offering territorial concessions as a basis for future ceasefire with the Russians.

Standing next to Johnson, Zelensky gloats about the EU’s positive assessment of Ukraine’s application to join the EU.

Will Ukraine join the EU faster than the UK #RejoinEU? pic.twitter.com/LxmKhc0JJ8

Johnson said from the Ukrainian capital that he wants to “send a clear and simple message to the Ukrainian people: The U.K. is with you, and we will be with you until you ultimately prevail.”

As for Macron, he didn’t specify precisely what kind of “gestures” could be made by Putin, or what kinds of “preconditions” might be set – though it might start with a willingness to implement a broader “pause” in fighting in the east and south for the sake of erecting civilian corridors. Earlier in the week Macron said it’s inevitable that Ukraine’s leadership “is going to have to negotiate with Russia.” He offered that France could mediate, but in a “transparent way”.