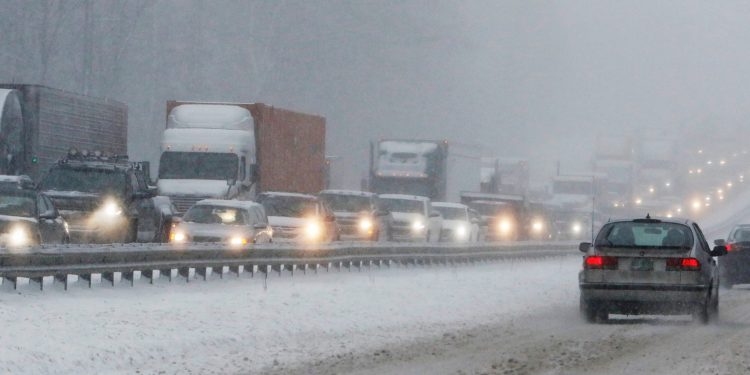 Northbound traffic on I-95 is at a standstill on December 30 following a tractor trailer that jack-knived in a snowstorm.

An Uber driver who got a teenage passenger home safely, after checking her into a hotel room with his own money during the epic jam on Interstate 95, has been rewarded with a new job opportunity, CNN reported.

DaVante Williams, 32, will work part-time as a lead driver at Alto — a luxury rideshare company. He will train other drivers on customer service, per CNN, while working as a realtor.

Williams demonstrated his customer service skills when he was supposed to drive a teenage girl from Union Station in Washington, DC, to Williamsburg, Virginia, early on Tuesday morning.

Along with countless other drivers, he was stuck on I-95 after a crash involving six tractor-trailers and some downed trees created a jam that lasted for more than 15 hours.

He tried taking an alternate route, CNN reported, but police directed him back onto the gridlocked Interstate.

Williams offered his teenage passenger drinks and snacks but said he could hear that she was “exhausted, emotional, and just tired.”

The Uber driver agreed with the girl’s parents that the best course of action would be to head back to DC, per CNN.

Wanting to ensure her safety, the media outlet said that Williams got his passenger a hotel room with his own money. A family friend later took the grateful teenager home, CNN reported.

“She thanked me for everything, and her parents had also thanked me for doing what I did for their daughter because I didn’t have to do it,” Williams told CNN.

Uber reimbursed Williams for the hotel and thanked him on Twitter for how he handled the journey.

Alto confirmed in a Twitter post that it had recruited Williams, saying it was “happy” to have him in the team.

A spokesperson for Alto told CNN that Williams is “exactly the type of customer and safety-focused leader we are looking to help lead our DC presence.”