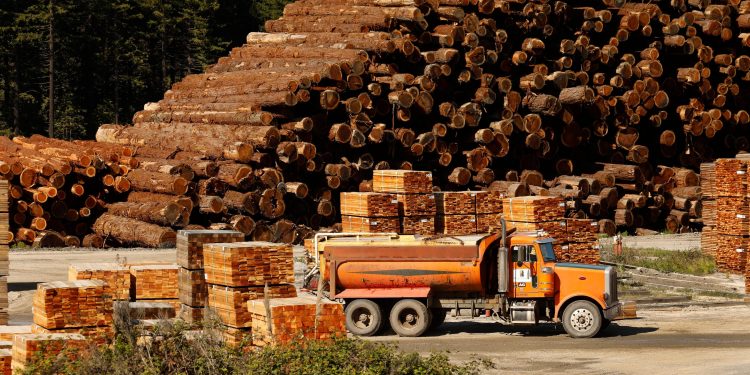 Lumber prices have been on a steep decline as a combination of rising interest rates, record-high inflation and a red-hot housing market translate into fewer people being able to afford to buy their own home.

Prices are down about 50% year-to-date, recently dropping to their lowest point in 9 months trading below the $600-per-thousand-board-feet mark. This marks a stark turnaround from 12 months ago, when prices hit a record $1,733, as pent-up demand for construction and home improvement after the pandemic fueled a speculative frenzy.

Why are lumber prices declining?

The weakness in lumber is coming from a jump in the cost of mortgages, where the traditional 30-year fixed mortgage rose above 5% earlier this year, reaching its highest since 2009. Bearing in mind that the average 30-year rate was below 3% a year ago and house prices were lower, the prospects for anyone looking to buy a home have worsened. On top of that, consumers are dealing with soaring inflation that is racking up the price of everyday goods from food to gas.

Never been a worse time to buy a home

It doesn’t look bright for lumber prices as fewer American consumers are able to afford to purchase a home.

In a National Housing Survey conducted by the Federal National Mortgage Association, homebuyers expressed they are heavily feeling the pinch with 80% of consumers saying it is a bad time to buy a home in the current environment. This sentiment is backed by a recent research note by Bank of America which posted that housing affordability has collapsed near to 1987 and 2005 lows.

“Consumers’ expectations that their personal financial situations will worsen over the next year reached an all-time high in the May survey, and they expressed greater concern about job security,” said Doug Duncan, Fannie Mae Senior Vice President, and Chief Economist.

“Further, respondents’ pessimism regarding homebuying conditions carried forward into May, with the percentage of respondents reporting it’s a bad time to buy a home hitting a new survey high. The share reporting that it’s ‘easy to get a mortgage’ also decreased across almost all segments,” he added.

Homebuyers will likely continue to be squeezed by a surge in mortgage rates, home prices, and inflation as a result, Duncan continued, signaling a grim outlook for lumber prices.

Freddie Mac economist Len Kiefer this week said the US housing market is facing its worst period of decline since 2006. He stressed the decline will leak into the summer and a rebound is unlikely.

An index of average national home prices rose by a record 21.1% year-on-year in March this year. Data for April from the National Association of Realtors shows the average price of a single-family home hit $391,200, the highest since records began in 1968 and double what it was just seven years ago.

And now, with the Federal Reserve ending an era of easy monetary policy, lumber prices could be set to deteriorate even further, especially if an environment of higher interest rates destroys construction demand.