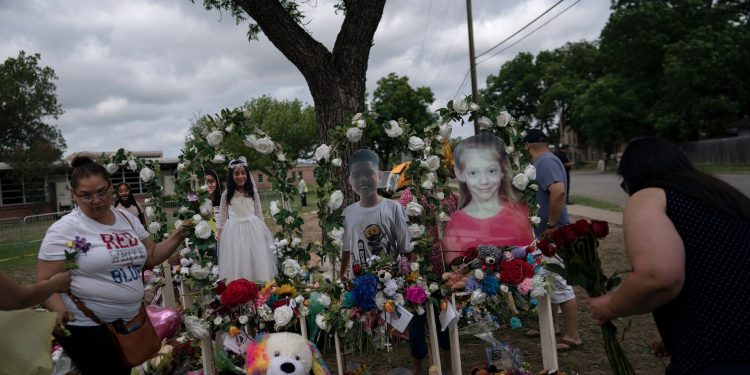 A memorial outside Robb Elementary School in Uvalde, Texas, Monday, May 30, 2022

Louisiana and Ohio are trying to introduce legislation that would make it easier to arm teachers in the wake of the school shooting in Uvalde, Texas, NBC News reported.

The efforts come despite pushback from educators and security experts. In Ohio, the state’s legislature sent a bill to Gov. Mike DeWine that would allow school districts to “designate armed staff for school security and safety,” and decrease the requirements for carrying a weapon, The Ohio Capital Journal reported.

DeWine indicated in a statement that he intends to sign the bill, adding that it was designed “to ensure training requirements were specific to a school environment and contained significant scenario-based training.”

“House Bill 99 accomplishes these goals, and I thank the General Assembly for passing this bill to protect Ohio children and teachers,” DeWine said in a statement.

In Louisiana, an amended bill would allow for volunteer “school protection officers” who would need to take a police training course and obtain a permit to carry a concealed weapon in school, WWL reported.

“What we have to do is focus on reasonable solutions and that reasonable solution is more security in the schools,” Republican State Sen. Eddie Lambert said of the measure. “To me, it’s a common-sense approach to try to deal with this situation.”

These efforts come more than a week after an 18-year-old gunman opened fire inside Robb Elementary School in Uvalde, Texas killing 19 children and two adults.

This isn’t the first time GOP legislators across the country have proposed arming teachers to combat mass shootings. Similar measures were proposed in 2018 when a gunman killed 17 people at Marjory Stoneman Douglas High School in Parkland, Florida. In the wake of that tragedy, then-President Donald Trump proposed giving teachers guns.

However, advocates and experts have pushed back on these measures, arguing that they don’t keep students safe. Instead, they’ve pushed for tighter gun control measures.

National Education Association President Becky Pringle said in a statement that she believes there needs to be fewer guns in schools.

“Teachers should be teaching, not acting as armed security guards,” Pringle said. “We need common-sense solutions now. Schools need more mental health professionals, not pistols; teachers need more resources, not revolvers. Arming teachers makes schools more dangerous and does nothing to protect students and their families when they go off to school, shop at the grocery store, attend church services, ride the subway, or simply walk down the streets of their neighborhoods.”

She continued: Those lawmakers pushing to arm teachers and fortify school buildings are simply trying to distract us from their failure to prevent another mass shooting.”

Democrats and gun safety advocates have called on state legislatures and Congress to pass stricter gun laws to prevent people from accessing weapons that could be used in a mass shooting.