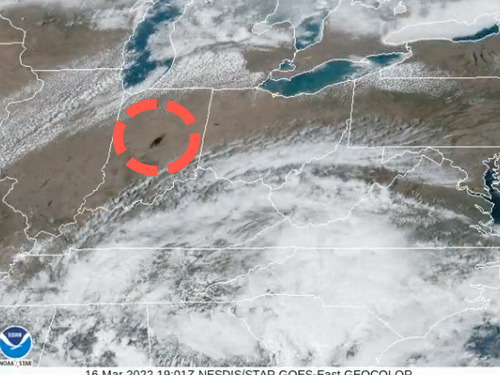 A monstrous plume of thick black smoke soared into the sky on Wednesday after a Walmart distribution center caught fire in Indiana. The fire could be seen from miles away — and even spotted by meteorological satellites.

Around 1300 ET Wednesday, Plainfield, Indiana firefighters arrived at the scene of a 1.2 million-square-foot Walmart distribution center entirely engulfed in flames.

It looked like a volcano! About a quarter mile from our house. pic.twitter.com/w39Enplm1h

A photo from 30 miles away.

By evening, more than 200 fight fighters from 24 agencies were battling the massive fire as millions of items, mainly consumer goods, burnt to a crisp and unleashed black smoke that could be seen from outer space.

0710hrs – Crews have rotated throughout the overnight attempting to manage most hot spots. 24 fire departments have assisted thus far and units will remain on the scene for quite some time. Thanks to all those that have provided assistance. pic.twitter.com/QtMerIOPtd

The National Weather Service Indianapolis tweeted a short GIF of one of its satellites that picked up the black smoke.

Visible satellite imagery showing the smoke plume from the fire in Plainfield, IN this afternoon. #inwx pic.twitter.com/PHMXJ6VUuy

Here’s a still shot of the black smoke seen from space.

The satellite’s-eye view of the toxic plume spreading across the state is absolutely shocking.

No details have been released on disruptions to customers stemming from the loss of a major disruption center.